by Tebogo Mokwena
in Small Business
96 1
0

KwaZulu-Natal paint manufacturer Lungisani Zwane’s has opened his second branch, attributing the business’ success to loyalty and professionalism. Vutivi News wrote about his business, Zebraah Paints, which manufactures paint in KwaMashu, Durban in September 2021. Zwane told Vutivi News that his second branch was based in Umlazi township, and he had employed one person.

The branch opened its doors in May and has faced a string of challenges that almost prevented it from launching. These included the floods in the province, his parents suddenly contracting Covid-19, and security issues at his factory. Zwane said the branch, which was meant to open in July last year, operated solely as a shop, whereas the main branch served as both a shop and a factory. 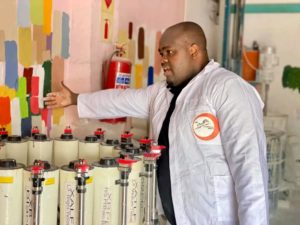 “The location was secured last year and just after we secured the location and planned for the launch, my parents contracted Covid-19 and I had to look after them, and so I could not focus on the business,” he said. “As soon as they got better we were supposed to launch. But there were issues relating to the security contract at the business complex where our KwaMashu branch is based. We could not move the stock and we had to postpone. “We dared not launch in October and November because that is our busiest period of the year, and right before launching this year, we were affected by the heavy rains, as there were water and electricity issues that had to be sorted.”

Zwane said that despite all these difficulties, the branch had been warmly received by the community and was already delivering orders as far as the Eastern Cape and Johannesburg. Zwane attributed his success to top-quality services and products. “It is very important for me to be loyal to our customers, and to be professional and transparent when we deal with them,” he said.

“It’s been a month since we’ve launched and we are seeing a lot of orders and customers coming into our shop. “Our business also receives 100% positive reviews on Facebook and this has led people to abandon well-known paint brands for our own!”. Zwane said the new branch had started off on the right foot because he created a marketing strategy that was tailored to the needs of Umlazi’s residents.

And to ensure that the branch was a success, one of his existing employees was heading up the shop and he was planning on advetising for another employee to assist with the growing demand. He also revealed that he would open a third branch before the end of the year.