Wine startup owner inspired by her role model to succeed

Queenery wines is being sold at Tops

When her role model Bonang Matheba launched her own champagne brand, Sthandiwe Zikode believed that she could follow in her footsteps and become a businesswoman. Even though she is 20 years old, today her wine graces the shelves of Spar Tops in her area, and she is not planning on stopping there.

Zikode, who is from Paulpietersburg in KwaZulu-Natal, told Vutivi News that she launched Queenery Wines in 2020. It sells pinotage, semi-sweet white wine and sweet rosé which Zikode said was manufactured for her by a winery in Cape Town. Despite only launching her brand last year, she managed to secure the deal with Spar Tops in Paulpietersburg. 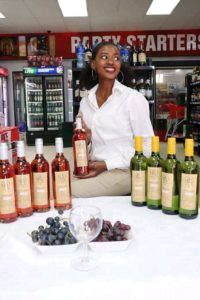 She also distributes the wine, whose name is inspired by her mother, to Richard’s Bay and Johannesburg. Zikode told Vutivi News that she used R16,000 she saved during high school as start-up capital.

With this, Zikode was able to purchase her first 200 bottles of wine. Each bottle costs R90. “It all started when I approached the store manager and asked them if I could promote my wine in their store,” she said.

“The manager was so impressed with my drive and fortitude that he expressed a desire to have my wine on the shelves.”

Zikode launched her business while she was still in high school. She said although she was able to find a balance between school and business, she lost many friends along the way. “I also learned the hard way that if a friendship does not benefit you, it is better to cut ties with that person,” she also said.

Some of the challenges she faced while starting out were how to get her products delivered, she told Vutivi News. “Sometimes my father, who helps me deliver, would be unavailable so I have to find alternative means to have it delivered,” she said.

She also used courier services. “I am also planning on buying a car that I can use for local deliveries,” the businesswoman said. Zikode, who is currently studying law at the University of South Africa, advised the youth should not be lazy and grab opportunities with both hands. 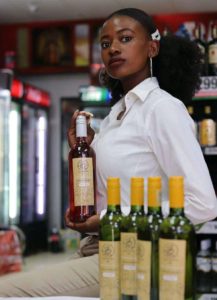 “Young people always talk about how they want to succeed, but they never want to put in the hard work. Neither do they want to find the opportunities that are available to them,” she explained. “I, for example, was surprised when the manager at Tops wanted to distribute my wine and I feared that my youthfulness would be taken for granted. However, it was precise because I am young that inspired the manager to stock my wine on the shelves.”

But selling wine is not where her journey ends. Zikode told Vutivi News that she wants to own more businesses in the future and strengthen her entrepreneurial profile.

“There are so many opportunities for us as a youth, and I want to take full advantage of them so that I can taste success like my role model,” she said.