Tips on how to operate a shishanyama from a container

Shisanyama is a lucrative business

Shishanyamas in townships has become lucrative businesses, with many of them making a name for themselves. And there is an upward trend of shisanyamas operating in containers as it saves costs on renting or building your own establishment. If you want to start your own shisanyama from a container, there are a few things you need to know.

Firstly, you need to obtain a lease agreement from the local government if you want to use government land. Once you have secured your land, you will need a container from which you can run your shishanyama. According to Sthembiso Khumalo, who is the owner of CP Container projects, a container for a shishanyama requires a minimum of R50,000 for a fully furnished, six-meter container.

However, the price varies according to the size of the container and the modifications. Khumalo said that most of his customers wanted to open a shishanyama and he built containers with rooftops. “Shishanyamas is like selling the experience of a rooftop venue, so containers are useful for them because they can run multiple services like a barbershop and a carwash,” he said. 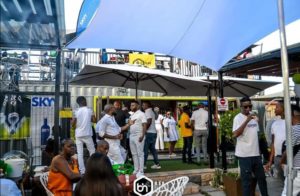 “For certain areas, those venues are part of a lifestyle where people meet and network with each other,” Khumalo told Vutivi News it took about three weeks to construct the container. “I’ve observed that a lot of people who order containers prefer containers because it’s much cheaper to construct as opposed to a brick structure,” he said.

“A majority of the people I have assisted have used their own front yards to run their business and they do not have to apply for a municipal space permit.” However, those that do not own their own property are encouraged by various municipalities to have a lease agreement. Informal traders are also expected to abide by municipal by-laws concerning public health such as keeping their premises clean and providing toilets.

Khumalo did warn those who wanted to get into the business to watch for people who scammed people out of their money. “One of the things you must be aware of if you want to start a business from containers is how to spot a scam artist in this sector,” he said.

“It’s recommended that you purchase a container in the city where you reside, as many scam artists lure people to faraway locations, as in the case of one customer of mine that was scammed R200,000 after he was lured to a KwaZulu-Natal-based company and paid for containers that were not delivered. “You must also insist to accompany the delivery of your container if you have to fetch it if you suspect that you are being scammed,” he warned.