She always loved dressing people from a young age

For clothing designer Margaret Ratau, it did not take long to realise that a stuffy office in the corporate world was not her dream job. The founder and director of Queendom.MMM, a fashion house based in Braamfontein in Johannesburg, decided instead that it was time to study to pursue her goals.

Ratau founded her company in 2015. She designs vintage-styled dresses for various occasions with a team of four employees. She told Vutivi News that she used the money she inherited after her mother passed away in 2010 to start her business. “I always loved dressing people up, styling them and coordinating colours for outfits. But I thought that because I didn’t know how to draw, this meant that I could not be a fashion designer,” she explained.

“As an adult, I started dressing my friends and helping them choose outfits, and they would encourage me to consider a career in fashion because I had an eye for quality fabric and colour coordination. “After I realised that the office life was not for me, I decided to go to fashion design school because I acknowledged that I needed to obtain the skill needed to put my thoughts to paper and fabric,” she said. 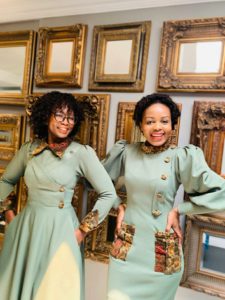 Ratau attended Sew Africa, a design school in Johannesburg for two years, where she learned various skills, including how to draw and make patterns. After studying, she rented out a small studio in Johannesburg and put her inheritance to good use. “I used the money to buy my first machine. When I posted the first dress that I made, the orders started coming in large numbers, much to my surprise,” she said.

She then moved her premises to Braamfontein as she felt it would be safer for customers than Johannesburg’s CBD. Ratau told Vutivi News that the cost of her dresses was determined by what fabric she used and the extra attention to detail. “For example, an everyday dress would cost R1500, and a bridesmaid dress can cost R3500 or more,” she said.

.And like many designers, her inspiration is drawn from a variety of sources. “When I walk into a shop, I would look at a fabric and be inspired by it. Sometimes I would be inspired by a sketch, or I would see someone with a collar that I find outstanding and decide to incorporate it into one of my designs,” the businesswoman said.

She said that the tremendous growth she has seen in the past years has kept her grounded. “As an artist, what makes you happy is that you have a design in mind, and you release it to people, who then respond to it positively and want more of the same product,” Ratau said. “It is this kind of recognition we get from our customers that keeps me humble.”