The calming impact of opening a business that suits you

Anver Temm and his team

Growing up in what Anver Temm refers to as the “animal rainbow nation” at his home, where the chickens and dogs equally fought for attention, is why the businessman loves animals. As an adult, he teamed up with a partner to find a hobby that they could both enjoy, and for Temm grooming was the obvious choice. After realising he had a knack for it and could basically do it in his sleep, he decided to trust in the moment, which was spurred on by him losing his job as an assistant chef at a casino.

Today, Temm’s business, Bling Bling Pet Groomers, is the go-to place for animal lovers from all walks of life in Kimberley and other parts of the Northern Cape. Temm, 37, told Vutivi News that one of the first things he did when he officially started being an animal groomer in 2012, was to gain the community’s trust. 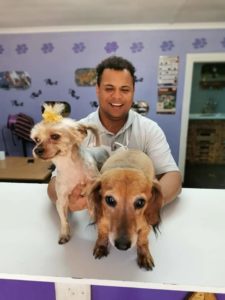 “I learned that people treat their pets like their own babies, so for them to leave their precious ‘children’ for two hours with a total stranger was a big step,” he said. “However, those that took a leap of faith saw the end product and they started using my services, which caused my business to expand by word of mouth.” Together with his team of five employees, Temm provides grooming services for pets and show animals in areas including Kimberley, Koffiefontein and Kuruman.

He also provides a collection and delivery service for customers that are based in faraway places. “People in the neighbourhood where I live know that I love animals,” he remarked. “Pet grooming, for me, is very relaxing and is a stress reliever of sorts. It calms my mind a lot. Five years ago, I lost everything when my partner and I split, so if it wasn’t for grooming, I would have definitely had a nervous breakdown.” Temm said that even though he was not a qualified vet, he had taught himself basic first aid skills to help dog owners in his neighbourhood.

“Taking dogs to vets for our community is very expensive, so whenever their dogs get minor injuries, I… treat their wounds and stitch them up, which they appreciate greatly,” he said. And Temm does not only own a grooming parlour for animals. He also ventured into making soap for humans through Bling Bling Soap Factory Kimberley, which was established five years ago.

He manufactures soaps from natural ingredients like coconut oil, avocado oil, olive oil and even turmeric. “I suffer from eczema and natural products used to treat eczema are very expensive,” the businessman explained. “I wanted to give people the experience of using natural products without having to pay steep prices,” Temm said that with the help of the Small Enterprise Development Agency, his products were tested at a laboratory. And as for the future, he dreams of owning a caravan or a trailer to offer his grooming services to the rest of the province.

Mankweng youth making her mark in the coffee and wine industries