Consumers may soon find locally made beauty products and other items manufactured by local SMMEs on the shelves of spaza shops, kasi and village supermarkets and even chain retailers.
This is part of a strategy by the Department of Small Business Development to localise the economy through targeted import replacement and supporting the utilisation of local skills and services in the infrastructure program.
“Why should we import toilet paper from China when there are SMMEs that manufacture such products here? Why can’t we eat chicken with our own identity (instead of importing)?” Minister of Small Business Development, Khumbudzo Ntshavheni, asked in a wide-ranging interview. Ntshavheni said the department was priming the informal and micro business sector as a catalyst for import replacement “as we build capacity for SMMEs to be major players in the light consumer goods manufacturing arena.”
The sectors targeted in this regard include steel manufacturing, health and beauty, clothing and textiles and food production. Ntshavheni decried the fact that for instance, the clothing and textile sector was still importing largely from China. But this may gradually change if the
implementation of the Clothing and Textiles Master Plan which was signed last year comes to fruition. The plan aims to create 121 000 new jobs in the retail-clothing textile and footwear sector over the next decade. It involves commitments by retailers to buy goods locally, a similar commitment by manufacturers to invest and support transformation, and by labour to develop bargaining structures that promote agile manufacturing. 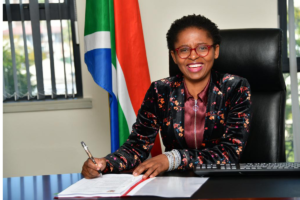 In his State of the Nation Address (SONA) earlier this year President Cyril Ramaphosa said the government had already begun to act vigorously against
illegal imports, seizing almost 400 containers with under-invoiced products in the last quarter of 2019. SA is a signatory to various international trade agreements that have seen China become the biggest importer of goods into the country. According to data released by the SA Revenue Services in July, China
was the top importer to SA (21.0%), followed by Germany (8.5%), United States (6.2%), India (5.8%) and Nigeria (3.8%). Ntshavheni argued that while the department of trade and industry has a responsibility to honour these bilateral trade agreements, her portfolio requires her to promote and protect local small businesses.
“Every country must protect its own products. We are implementing import replacement unashamedly. I will not retreat on that. We need to protect the interest of small businesses,” said Ntshavheni. She said the department is working with farmers to ensure they produce for the local retail market and also to supply local informal vendors and traders.

READ MORE: Small businesses can revive the economy. But the government must do more

“Our products are going to be competitive,” Ntshavheni said in response to the issue of quality control of goods produced locally by SMMEs. To this end she said the department was working with
the SA Bureau of Standards to help ensure that goods produced by SMMEs were fast-tracked through the certification process. Ntshaveni said one of the department’s plans was to create a SMME database that will be accessible to international markets.
This would open the door for small businesses to reach over three billion people on the continent and other bigger markets on other continents. She said so far big retailers such as Massmart and Builders Warehouse had already provided a list of products that could be sourced from SMMEs.
One of the success stories includes the provision of specialised construction nails by an Eastern Cape-based SMME.
“We are making a call to SA businesses to support locals,” said Ntshavheni.