It was not enough for Maime Kolobe to come from a family of brick manufacturers to ensure he produces quality products. His desire to make township homes as beautiful as suburb homes motivates him daily and that is why Sensational Paving Gurus is known in many parts of the Free State, according to Kolobe. The Qwa-Qwa native told Vutivi News that he discovered in his early 20s that his father and grandfather used to manufacture bricks.

“I learned that when they did not have enough money to get themselves through tertiary education, they turned to the craft of brickmaking,” he said. “For me, it’s totally different because it doesn’t stop at brickmaking.” Sensational Paving Gurus was founded in 2017 after Kolobe had gained experience as a landscaper in Gauteng. “When I was still in college, my brother invited me to work for a paving company,” he said.

“After doing the work for a year, I saw a future for myself in the sector,” Kolobe said that it was the beauty he experienced while working with his brother that drew his eye to paving. “Most of the work I did while working for the company was for guest lodges in Gauteng,” he told Vutivi News. “I was so stunned by the beauty of the lodges that I asked myself if it would be possible to introduce this level of beauty to townships. “I also wanted to teach township residents that living in the township should not disqualify you from being able to decorate your home.” 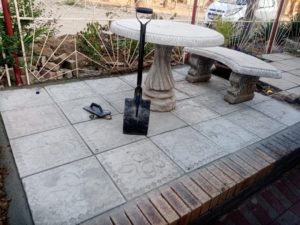 Kolobe moved to Kroonstad to start his business. They manufacture and install paving with different designs, and they also provide gardening services. “It was very difficult to start the business, particularly because I had to educate township residents what paving is and its benefits,” he said. “I also had to gain the trust of people because my business was fairly new, so naturally people had reservations.”

Kolobe said that he had issues with customers in the early days and changed the way he did business. “When I started out, I struggled with customers that would place orders for paving and when we finished the order, the customers would suddenly cancel it,” he said. “As a result I resorted to manufacturing per order, and requesting a 50% upfront deposit.” Kolobe also said that it was thanks to a community developer that he was able to start the business in Kroonstad.

“I was in possession of the necessary tools and machinery to manufacture paving, but I did not have land,” he explained. “A Good Samaritan by the name of Moeketsi Ntsala gave me a helping hand and provided me with the money to procure the premises.” Kolobe’s business also has a branch in Bethlehem, and his customer base is largely situated in the Free State. “My dream is to see myself providing services to other homes and areas in every province across the country,” he said.