Saucy couple gets it right after many tries

by Tebogo Mokwena
in Small Business
52 1
0

Sam Suze and his wife, Katlego of Lemme Chew

Sam Suze and his wife, Katlego, poured their energy into many businesses before deciding to focus on Lemme Chew Foods and Beverages. It has proved worthwhile as their sauces now grace the shelves of retail stores in Tshwane. Suze told Vutivi News that the business was owned by his wife and he was the company’s sales, retail and marketing manager.

He said its growth was due to the couple combining their efforts to turn it into a success. The company was established in 2016, but it wasn’t until the lockdown period that they focused fully on the business. “Before then, we managed artists, had a record label and even owned an events management company,” Suze said. “When we decided to focus all our energy on the business, we quit our jobs and with our packages, we opened a butchery and a tavern. “However, as soon as we did that, the country went into a hard lockdown and our businesses did not survive.”

Suze said that they decided to use their remaining funds to establish the business to manufacture sauces after they had a short stint as a sauce reseller for a local manufacturer. “When the sauces’ orders started piling up, we proposed a partnership with the sauce manufacturer where we offered to manufacture the sauce on a larger scale,” he said.”He turned us down, and we decided to go our separate ways.

“We were also inspired by our love for condiments, and how we believed that the condiments we used were either not hot enough or were too hot and lacked a particular element of taste.” Lemme Chew sauces come in three flavours: Betha Top, Mild and Lemon and Herbs. They can be found on the shelves of several Shoprite and Checkers stores, as well as local retailers and OBC stores It took many sacrifices for the couple to reach this point. 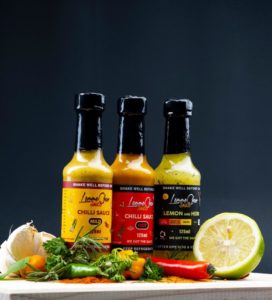 “One of our cars was repossessed, we were kicked out of our home because we couldn’t pay rent, and we had to change our children’s schools,” he said. “Our first big break came when Braai Maestro, an establishment in Westview, placed our products on their shelves. Soon afterward, other retail outlets followed suit.” Suze said that the lessons they learned included perseverance and patience.

“Even when the future seemed bleak when we lost almost everything around us, we did not give up on our dream,” he said. “Our dream is to be able to build and own our own factory, where we can hire skilled and qualified people in order to bring value to the company.” At the moment, the company has four permanent and one casual staffer. It is renting a factory in Sunderland Ridge.

12
No Result
View All Result