Quality shacks that stand out

When he was in high school, Tebogo Johane fell in love with architecture and drawing up plans for houses. But he was unable to continue studying, which frustrated him because he could not do what he truly loved. When he learned about the art of building shacks, he seized the opportunity and is now one of the most popular shack builders in the country.

Johane’s business has built and designed artistic and colourful shacks that take on the form of houses. He said this gave people the feeling of living in a home while being able to afford building costs. Johane, who is based in Tshwane and has been building shacks since 2016, told Vutivi News that it was a chance encounter with his late mentor that changed his life. 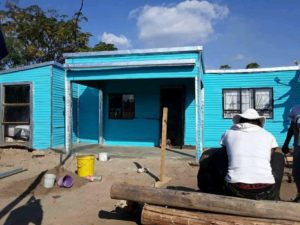 “I saw him building these beautiful shacks and when I approached him and asked to be his apprentice, he agreed and was impressed by my passion for building,” he said. “I learned all I could from him, and before he died, he would always tell me that one day I would carry on his legacy and surpass him.” Johane has built shacks in every part of South Africa, as well as in neighbouring countries like Swaziland, Lesotho and Namibia.

His colourful shacks and their unique shapes have earned him popularity on social media. On Facebook alone, he has more than 30,000 followers. “These translate into very profitable margins because I am always busy and I always get orders,” said Johane, who employs one person to assist him in building the shacks. “My employee helps me with everything from fitting the wooden poles to cutting the corrugated iron in such a way that the design stands out.” Johane told Vutivi News that what separated his shacks from others was their quality, and the dedication he poured into his craft.

“Unlike many shack builders I start by drawing up a plan with precise measurements,” he explained. “The customer then buys the material they need such as corrugated iron, wooden poles and window frames. Depending on the customer’s taste, we even add extras to make the interior look really good.”

It took less than a week to build a two-bedroom shack. His company did everything including the floors, ceiling and plumbing. Johane said that one of the biggest challenges in running his business was that customers had little knowledge of what type of materials they needed to purchase. “Sometimes the customers would buy the wrong material, and that is the difference between a good shack and a weak shack,” he said. “Sometimes I do my best to offer consultations as to what type of material they can buy, but in most cases, they tend to buy before I can consult them.”

Nevertheless, Johane said that his work brought him great joy. “What I love about what I do is the fact that I am short by stature, so whenever I arrive on-site, the client always thinks that I am a child. When they see my finished work, they forget that I am a child!” Johane told Vutivi News that he envisioned himself owning a warehouse one day where he would manufacture and provide his own material to ensure that his shacks were top-notch.