From being a mechanic to selling atchar and cleaning detergents, Tiyani Maluleke has never been one to sit on his laurels. His latest venture, Grub Worx, which is a food truck he built with his own hands, is a further testament to his tenacious spirit. Maluleke told Vutivi News that the concept of his Grub Truck, as he affectionately describes it, came about when he and a friend wanted to start “Mogodu Mondays” where they sold pap and mogodu (a combination between tripe and intestines) earlier this year.

Maluleke, who is based in Naledi in Soweto, said it was then that he realised the potential for his business. “When I saw that I could handle 50 people alone, I saw that I had the capability to start the food truck business,” he said. “I started shopping for trailers, but I realised that they were out of my budget. A close friend of mine advised me to build one on my own since I was very good with my hands.” 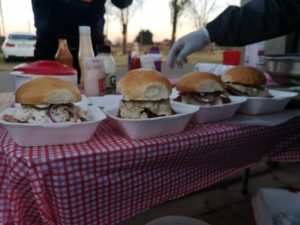 Maluleke then proceeded to build everything from scratch. “Since I am used to building things for myself like my own bed and my own cupboard, I saw this as a task that I could accomplish. I built the bakkie by scratch as it had no engine or parts, and was just a body,” he said.

“It took me two days to build the grill and the deep fryer, and then it took me another month to construct the kitchen.” Today, his truck sells gourmet burgers and chips for R60 in Soweto, where he operates in Naledi and Thokoza Park.

Maluleke told Vutivi News that his journey had been long and lonely. “Whenever we read or hear from successful entrepreneurs they hardly talk about the dark side of entrepreneurship,” he noted. “They don’t easily talk about the depression, the pain and sacrifices you make, such as sacrificing something as small as an ice cream you like just because you want your business to succeed.”

However, despite his arduous journey, he has been operating for over six months. “Whenever people buy my food, they are always amazed that such quality burgers could be found here in the townships,” Maluleke said. “I pour my heart and my soul into every morsel I make, and I believe that all the hard work and sweat and tears somewhat reflect in the food I make.” He told Vutivi News that his next plan was to build his brand amongst residents in other parts of Soweto.