Self-taught portrait artist Velile Mxholisi started his art business to prove to the youth that even a talent such as drawing, can be turned into a growing business. Mxholisi explained that before he started his business, Bravho Artworks, he recognised his talent for drawing from a young age, but he could not develop it the way he wanted to, so he taught himself.

“I taught myself by going to YouTube and learning how to draw portraits,” he explained.“When I saw other artists on social media collecting, posting and selling their art, I was amazed and motivated to do the same thing, and I started practising more and training more, and this was at the beginning of 2020.“This was when I decided to convert it into a business and founded Bravho Artworks.” 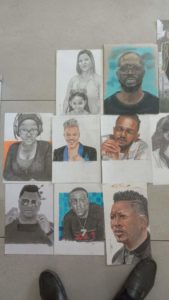 According to Mxholisi, he was given a lot of support when he started, which encouraged him. “I started by doing free portraits,” he said. “When I saw the demand increase, I started charging per portrait. “I posted my work on social media and I was getting support from social media, and the orders started coming in.” However, he had to sift through real customers and chancers.

Even after introducing a price, people would inbox him and ask for free portraits. “They refused to understand that this is a business and they would ask me for a free portrait as a favour to them,” he said. “When they eventually ordered, some of them would delay paying me, even going as far as not paying me at all,” he said. “I started demanding a 50% deposit for each commission, and this is how I (now) work.

The customer sends me a picture of themselves or the subject in question, accompanied by the deposit.” “Depending on the size of the artwork, it takes him between two to five days to complete. Mxholisi said he updated the customer on the progress regularly, and once the portrait was completed, he took a picture of it.

Once the customer paid or sent proof of payment, he couriered the artwork. Mxholisi believes the recognition he has received from fellow South Africans is his biggest and most important achievement. “I want to be recognised for my work nationally and internationally,” the Durban-based artist said. “There is a lot of interest from internationally-based art lovers on social media, and I believe that it is only a matter of time before I tap into that market.”