Polokwane designer goes global thanks to his mother

Ronald Dikgari believes that his mother’s painstaking attention to teaching him the art of beading is the reason he is now an internationally recognised designer. He told Vutivi News that thanks to the skills he learned, he has been able to travel the world, meet other entrepreneurs and showcase his talent. “My mother took the effort to teach me all that she knows about beading, as she has been beading since I was a child, and my passion developed there,” he said. 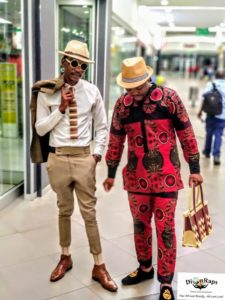 A creative at heart, Dikgari expresses his creativity in colours through Dironraps, a company he established in 2017. The Polokwane native draws his inspiration from the vibrant cultures of South Africa and the rest of the continent. He makes handbags, beaded ties, bowties, purses, bracelets, bangles and earrings from beads, which he sources from a shop in Polokwane and another in Thohoyandou.

Dikgari told Vutivi News that travelling to other countries had helped him find a niche market. He attended the Jewelers International Show at the Miami Convention Centre in the United States in 2019, and the following year he went to the NY NOW International Exhibition in New York.

“I also attended many local and national exhibitions, where I met a lot of amazing people,” he said. “A handbag I made was featured on SABC soapie Skeem Saam during the wedding of characters Marothi and Rachel. “I use this as my selling point locally, because I discovered that people from overseas love my products more than the local market, which is difficult to break into because of its saturation,” he explained.

Dikgari said that the institution where he currently studied jewellery design, the Limpopo Jewellery Business Incubator, assisted him in approaching the Trade, Industry and Competition Department so that he could travel overseas. Dikgari told Vutivi News he also drew inspiration from renowned artist Esther Mahlangu. “Her work is truly inspirational and gives me the courage to challenge the stigma in my province that beadwork is only reserved for old people,” he said.

“Even the old people I meet at local exhibitions are proud of me and applaud me for taking the bold step to do away with this stereotype,” Dikgari said he was incredibly proud of his creations. “Whenever I work on a project, I recall the memories of travelling to other countries where my work has been showcased and the overwhelming reception I received, and it truly pushes me to go further,” he said.

Dikgari said he believed in expanding his talents and had now branched into jewellery design, including rings, engagement rings, bracelets and other jewellery using precious metals like gold, silver and bronze. His products can be found online, where he has a website that includes a comprehensive catalogue of his work.