Multinational company Naspers has announced an R40-million investment for agriculture start-up Nile, which connects growers to buyers directly. Naspers said the investment was part of an R83-million equity round led by Naspers Foundry. This is the 10th investment since Nasper’s Foundry was launched in 2019, and it is part of the company’s R1.4 billion commitment to South Africa’s tech ecosystem.

The Nile was founded in 2020 by Louis De Kock, Eugene Roodt and Nick Kleinhans, to serve the growing need of farmers wanting to connect directly to their buyers. Since the company was founded, it has traded approximately 30 million kilograms of agricultural products including fruit and vegetables. Its client base is concentrated in the Southern African Development Community (SADC) region and is in 35 towns and cities. 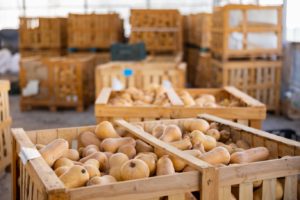 The platform is used by both small-scale and large-scale farmers and operates in Botswana, Namibia, Eswatini, Mozambique and South Africa. De Kock said support for the platform meant that they would be able to make fresh produce more accessible to people across the entire continent. “While we were able to bootstrap the Nile through our initial growth phase, we look forward to having the backing of an internationally-respected investor and experienced operator like Naspers as we scale our cross-border operations to the rest of Africa,” he said.

Nasper’s South Africa CEO Phuthi Mahanyele-Dabengwa stressed the value that such a start-up brought to the country’s food security. “The importance of food security cannot be overstated, and a platform like the Nile provides a positive contribution towards helping to sustain it,” he said. “According to the World Bank, Africa’s food system has huge potential to create more and better jobs.

“More inclusive value chains that link farmers and other stakeholders can help realise this potential.” He also said that Nasper’s investment in the agri-tech start-up was a great example of how technology could support communities and improve economic opportunities.

Fabian Whate, head of Naspers Foundry, expressed excitement at Nile’s growth potential and the contribution it could make to transforming the trade of fresh produce, which was prevalent in many townships and rural areas. “Nile provides a fully integrated ecosystem that creates trust between buyers and sellers of the platform, and is a great example of tech entrepreneurs building innovative solutions that address people’s everyday needs,” he said.