Lockdown resulted in a few hurdles for the business

Tsholofelo Makau from Emfuleni said coming from a family of Entrepreneurs prepared her for her own entrepreneurial journey.

Being raised in a family of entrepreneurs meant that Tsholofelo Makau was exposed to the world of running your own business from an early age. So, following in the footsteps of the rest of her family, she launched TsholoMixer Mobile Bar in 2020.

Makau told Vutivi News the mobile bar offered bartending services for events such as festivals, weddings, private and public parties, funerals, housewarmings and meetings. “We serve alcoholic and non-alcoholic beverages such as cocktails, ciders, wines, champagne and sometimes cognac depending on the client’s requests,” she said. 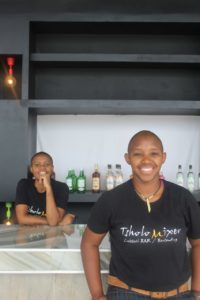 Her business currently employs six people and caters for events across the country. Makau, who lives in Emfuleni in Gauteng, said her big break came at an event her mother was hosting. “I started off through my mother’s business, Suzan’s Catering and Décor. My mother had a wedding gig and I asked the couple if I could render my services and the couple was keen on the idea,” she explained.

“While I was rendering the services, a lot of people started asking for information with regards to the mobile bar. I realised then that it was a great opportunity for me to launch TsholoMixer Mobile Bar officially.”

Makau said that when her bar was hired, it catered according to the type of event type and capacity. “When we have an event, we look at the number of people who will be at the event in order to figure out how many products we will to accommodate everyone,” she said.

“Once that is done, we figure out the type of products that would be best suitable for the type of event. After that, we estimate the number of employees needed for that event.” Makau said the lockdown resulted in a few hurdles for her business, including applying for a temporary permit three days before an event in order to be able to sell alcohol.

“Sometimes we get a client at the last minute and we have to turn them down because we don’t have the permit.” However, the entrepreneur has not allowed this to dampen her spirits.

Her biggest event so far has been a wedding in Mahikeng. 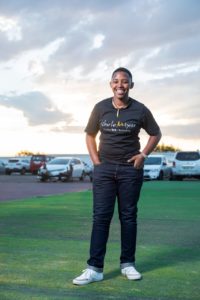 “The couple requested that the main beverages should be wine and champagne, and it was exciting because I got to learn a lot about wines and different types of champagne,” she said. “I also made connections and met people who were business owners of well-known companies. The wedding helped us gain much exposure.”

Makau said her business had also entered the digital age. “We have moved from accepting cash payments to making use of the latest card machines, which enables us to accept card payments anywhere which also taps for payment,” she said.