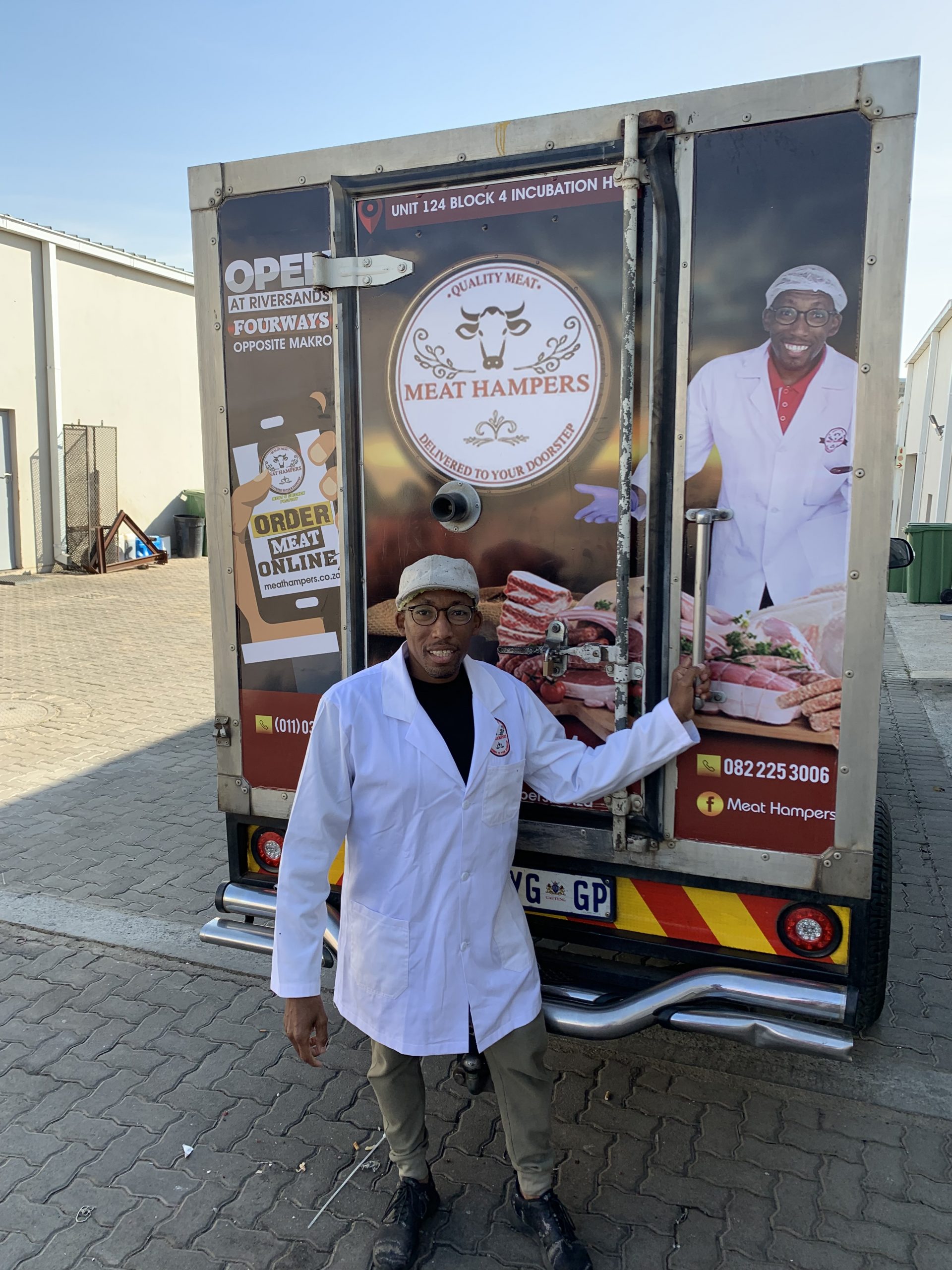 Wally Ledwaba, the man behind the Basadi Programme to sell meat in the townships. Picture by Mukurukuru Media.

A new meat sales initiative run by township women is set to change the way people do business especially during this uncertain time of economic and consumer uncertainty.
Meat Hampers, a Gauteng based company is offering women an opportunity to become entrepreneurs through its Basadi Programme.

“The Basadi Programme is mainly focusing on women and wanting to create an overall culture of women having an income of their own,” Wally Ledwaba, the founder said.
The women would take on an administrative role of sorts, by placing and managing the meat orders from their communities via WhatsApp, all while building and strengthening community relations.
The Meat Hampers operation is based in Alexandra, where the packages would then be delivered to different doorsteps in dozens of communities.
Ledwaba said that his inspiration to start the Basadi Programme was something he had seen in his personal life.
“In my life, and the lives of many kids whenever something happens or whenever we need things we always consult the women in the community, these women are the pillar of our communities,” Ledwaba said.

The women of the Basadi Programme act as middlemen between the Meat Hampers company and the community. The representatives can expect to make money on a commission based on the number of meat packages sold.
The commission would be paid out fortnightly. The company believes that potential community leaders could earn an average of R5000 a month in commission.
One of the beneficiaries in the programme Bongiwe Mbatha, a mother of three in the service industry was severely affected by the coronavirus outbreak and resultant lockdown.

While her base pay was assured by her employers, people like her in the service industry relied on gratuities and tips as a second stream of income. Many times those tips would surpass the restaurants’ base pay. But she still needed to come up with an alternative form of income while the economy.
“I really believe that this is a great opportunity for me to provide for my kids,” Mbatha said.
Most women who were projected to join the Basadi Programme were going to use it as a form of supplemental income in light of pay cuts and various fiscal restrictions post-Covid.

“Joining this programme has really given me hope, especially since the beginning of Covid-19. It’s giving me hope to make an extra income,” Mbatha continued.
This method of vending was borrowed from several practices and sales techniques that were quite different from the traditional vending and distribution.
“I really believe that is going to help a lot of women find their voice and the independence,” Mokgadi Kutu said.

Kutu said that her new position as the director of the Basadi Programme was going to allow her to see a direct impact on the community and would allow her to see an almost instantaneous positive change.
“This is an amazing position because you don’t get to see a whole lot of women taking charge of projects and other types of leadership roles,” she said.

“We shouldn’t have to look outward as black people. We should be looking inward for local solutions to local problems,” she said.
Kutu said this programme was different from a typical 9-5 job in a brick and mortar setting and also different to the popular and well-known model of informal selling/setting up stock at the flea market.“This isn’t just about meat. It’s also about food security in the townships. We hope to expand this beyond meat and eventually branch out into entire township-based grocery and food delivery programs,” Ledwaba said.

This project would change the conversation and the way we think of small business and female financial freedom and equality. This project of Basadi was still relatively new and in the beginning and was open to various improvements, but the main goal was to embrace the black entrepreneurial spirit. – Mukurukuru Media