The art of making cheese requires patience and care.

Cheese made by Mahlatse Mailula

Making cheese taught Mahlatse Mailula patience, something she admits to not possessing in the past. It also instilled in her an appreciation of cheese made in the traditional way – using pasteurised milk and cultures – instead of processed milk. Mailula told Vutivi News that when she started making cheese in 2018 through her Company, Lateria Delish, she did not have a mentor, nor any knowledge or prior experience of the industry. “The interest in making cheese came about when I was looking to enter into the business of supplying milk, especially good milk,” she said. 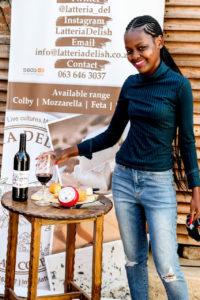 “I bought some books and one of the books I was reading had a chapter on the many uses of milk. Making cheese was one of these uses.” Today, 30-year-old Mailula makes white cheeses, semi-hard cheeses and is in the process of making blue cheese. The art of making cheese, Mailula explained, required patience and care.

“I make cheese that is very young and that requires about six weeks to mature, using cultures to acidify the cheese. For the cheese to be tasty, I need to give it time, allow the cultures to break down and to be absorbed into the lactose, and to keep it moist,” she said. “Sometimes certain cheeses take almost 12 months to mature.” Mailula, who is from Seshego in Polokwane, said that when she started out, she learned through trial and error.

“I learned by experimenting, following recipes I found online and reading the history of how cheese was made,” she said. “Learning how cheese was made in the old traditional way captivated me and I preferred this over-processed cheese.” The cheese is sold online nationally to individuals and to catering companies for their platters. Mailula told Vutivi News that a boost she received from the National Youth Development Agency gave her a good kickstart for her business.

“When I started out, I received funding which I used to buy the equipment I employ in making my cheeses,” she said. “My current goal is obtaining a bigger machine so that I can make cheese in large quantities, as I am getting more and more orders every day.” Mailula believed that not having a mentor had slowed down her growth, however, she was proud of her journey.

“Today I can teach someone else about the process of making cheese because I took the route that made me encounter many failures before I reached the level of success I am currently enjoying.”