Low-cost housing that is pleasing to the eye

Some of the low cost houses built by Manex Magadzire

Even though the property market is saturated with modern houses, Manex Magadzire says many people cannot afford to build homes. So, he decided to start Dura Homes, which provides quality and affordable housing using precast material.

The Centurion-based company builds different structures including homes, clinics, schools and apartment buildings. But its focus is low-cost housing for those who do not qualify for RDP homes. Magadzire started building precast houses on a part-time basis four years ago after spotting a gap in the market for affordable accommodation. 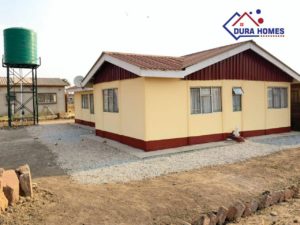 The company started trading on a full-time basis two years ago. “We came up with the idea where we can be able to build low-cost houses because the market for high-end expensive apartments is congested. I was also inspired by a visit I made to an acquaintance’s home, who lived in a well-decorated shack.,” he told Vutivi News.

“Everyone wants to get those kinds of tenders, but nobody remembers those who are not able to afford to buy apartments and houses,” Magadzire said that his structures could be built anywhere and were suitable for any kind of environment.

“This type of structure can withstand all harsh weather conditions and is not susceptible to getting burned in the case of an electrical or gas fault unlike Wendy houses,” he said. Magadzire explained that precast was a building system based on ready-made, factory-manufactured components and intelligent connections. This allowed for a home to be designed and constructed at a reasonable cost and quickly. 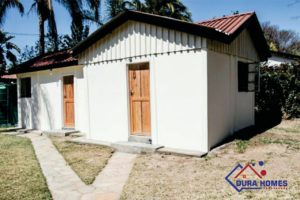 While the company had stipulated prices for its houses, Magadzire said some customers wanted different designs, which they worked to incorporate into the homes. “A single room is R18000 which includes roofing, flooring, window and door frames,” he said.

“A two-bedroom house costs R60,000 and a three-bedroom house with a garage would cost R120,000,” Magadzire said his team comprised architects and engineers. “… when a customer wants a house, we ask them to draw a tough sketch of the house they have in mind. We forward it to the architect who proceeds to draw plans.”

He said that although their homes were affordable, some people wanted bigger structures that they could not pay for. “I can tell you that if I had to build homes for every quote I gave, I would have a multi-million rand business,” Magadzire said.

“Someone once paid me to build a show house and promised to give me a contract of building 200 houses. However, once I finished building the house, he paid me for the house and did not continue with the project.” Another hurdle has been the impact of the Covid-19 pandemic. Many more people were unemployed, and this had affected his profit margin. But the business was recovering.

“We are in competition with Wendy houses, and we face doubting Thomases the whole time. But those that buy are enthusiastic and understand the value of these houses,” he said. The company has built houses across the country.