Kgopa has launched his own affordable calculator

After working with children in rural Limpopo and developing their love for numbers, mathematician Mothupi Kgopa realised just how difficult it was for them to afford scientific calculators. Kgoga, who started the Kgopa Foundation for Mathematics in 2017 to help learners at home, decided to remedy this situation by launching his own affordable scientific calculator brand – Geleza.

He told Vutivi News that he believed Geleza would be a gamechanger for African children learning maths. “I have been training mathematicians for the past 10 years and trained them in places including the Western Cape, Free State, Gauteng, and Limpopo, where I am currently doing work in Burgersfort,” Kgoga said.

“The idea behind Geleza Calculator came about while I was working with children in Burgersfort and realised that many of them could not afford a scientific calculator. “When I decided to get them calculators it hit me that I had to part with at least R320 for a single calculator,” he said. After promising pupils that he would provide them with calculators, Kgoga researched calculators, which resulted in him launching Geleza last year through his education company called Geleza Tech. 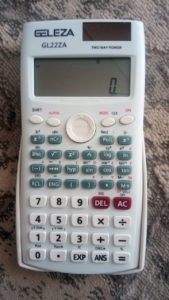 According to Kgopa, what set the Geleza Calculator apart from other brands, was that it could be used without a battery. “It uses both battery and solar systems,” Kgopa said. “This will fare well in Africa due to the high levels of poverty and unemployment. Furthermore, the learners don’t have to keep buying batteries.” Kgopa has received orders from all over the country and southern African countries including eSwatini, Zimbabwe, Zambia, and Botswana.

“I see myself manufacturing calculators for the African continent in the next five to 10 years; something I believe is very necessary,” he said. A calculator costs R150 and can be ordered online and via Geleza Tech’s social media platforms. Kgopa’s entrepreneurial flair is not only limited to manufacturing calculators. He is also the owner of Afrifarm Crowd, which he founded in 2018 and registered in 2020.

It manufactures egg trays and wood shavings for poultry farming and also grows layers and broilers. Kgopa said that he would soon manufacture 80 tons of animal feeds as part of the manufacturing leg of his company.

He called on the government to help foster a conducive environment for the manufacturing sector and support SMMEs, which the mathematician believed were the backbone of economies. “I always say that we spend a lot of money on grants that ought to be supporting entrepreneurs who will create jobs,” he said. “A large part of the budget should be going to SMMEs if we want to deal with unemployment.”

Mankweng youth making her mark in the coffee and wine industries