The gym needs an area for aerobics

The gym that is owned by Tebogo Mabula

After seeing how many people in his neighbourhood struggled to get fit, Tebogo Mabula sought a solution to the looming crisis of obesity. As a fitness lover, he founded Tebza’s Gym, which Mabula said had changed the lives and health of those who exercise there.

Mabula, who resides in Windmill Park in Ekurhuleni, told Vutivi News that his gym was founded in 2015. He currently employed five people. “I was active in school a lot, so when I moved to Windmill Park in 2014, I used to run to Carnival City nearby after work,” he said.

“Most people in my area were not active, and I wanted to rush to a solution to avoid people becoming obese, so I tried to find a solution before the problem arise.” The gym has a weightlifting section, a cardio workout area with treadmills and exercise bikes, and an area for aerobics.

“Tebza’s Gym is different because of our prices, which are cheaper than other gyms in the area,” he said. “Our aerobics classes are so simple that even a new member can join them and not feel like they’re doing something very difficult.”

The aerobics classes are for all ages. 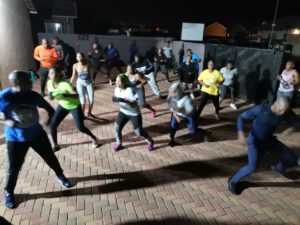 One of Mabula’s success stories involved a 58-year-old woman, who wanted to get into shape. “She came into the gym and she couldn’t bend down and touch her toes, neither could she do her household chores,” he said. “She joined the aerobics class and within three months she had lost weight and even improved her breathing.”

Mabula said when he started out, he had two treadmills and two exercise bikes.

“I faced the daunting reality that equipment was expensive,” he told Vutivi News. “As people joined the gym, I ended up buying second-hand equipment from people who did not use their equipment any longer. “We are also struggling with erecting an area for our aerobics class, as we host them outside which makes it difficult for members to come when it rains,” he said.

Mabula said that going up against big gyms has kept him on his toes. “Competing with the likes of Virgin is a challenge because I don’t bind our members to contracts. I depend more on people paying on a monthly basis according to their attendance so that I can pay my five employees,” he explained.

“Bigger gyms make their members’ sign contracts because of the volume of members… With us, we could get 10 people joining one month and five people the next month. “Ultimately we are just running our own race and motivating the community to remain active and not fall into the trap of obesity,” he said.

Mabula said he emerged from the hard lockdown with battle scars he was proud of.

“When lockdown level five was announced we had to close, and as a result, members didn’t pay their monthly subscription. I had to dig deep into my savings so that I could pay my employees since they too had families to feed,” he said.

At one stage Mabula wanted the gym to go online, but he realised that it would not make a profit since his clients would have to use their own data to watch exercise videos.

His next plans are to conquer the Ekurhuleni gym space. He also wants to build a swimming pool so that children can stop loitering and have something meaningful and healthy to do with their time.

136
No Result
View All Result