This is to help young girls and women

The importance of girls and women being able to afford quality sanitary pads is the reason behind Matefo Morakeng’s Dear Bella Sanitary Pad business. A packet of Dear Bella sanitary pads costs under R10, compared to the usual price of between R20 and R30, a packet of 10 pads.

In just a short space of time, Morakeng was able to secure a distribution deal with a major retailer thanks to the government intervening. 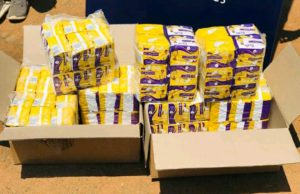 She told Vutivi News that Dear Bella started in 2018.

It now has two offices in Bloemfontein and Johannesburg, which currently manufacture the maxi pad range. But she plans on manufacturing other ranges. Morakeng believes that getting into the business was a no-brainer.

“A lot of girls in South Africa cannot afford sanitary pads and some go to the extent of sleeping with older men because they know that these men will give them money so that they can buy toiletries for themselves,” she said. “I also wanted a sanitary pad that is relatable to the average girl from the townships and rural areas in the sense that it is a brand that is owned by a black woman, which they can certainly relate to.”

When Morakeng started out, she was selling her product at local markets in Bloemfontein. It caught the attention of local supermarket retailers and she started supplying them.

Later it was spotted by Small Business Development Department. Morakeng said her sanitary pads were selected as one of 1000 locally produced products to be procured by the government through its localisation programme. “The department saw my product in the local market at a cash and carry in Qwaqwa and contacted me. Afterwards, they helped me obtain a distribution deal with Dischem,” she explained. 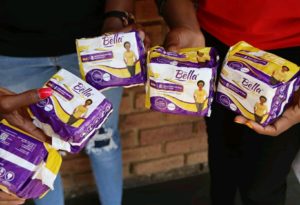 “My product is already packaged and tested by the South African Bureau of Standards, and complies with ISO (International Organisation for Standardisation) standards,” she said. Morakeng said that Dear Bella could now be found in Dischem pharmacies in Gauteng, the Free State, Limpopo, Kwa-Zulu Natal and the North West. It was also exported to Lesotho.

She also said that Dear Bella gave away free sanitary pads to seven girls per month.

“The initiative is called Guardian Angels, and we encourage people to sign up and pay R99 per month. We always get requests from different areas in the country, and sometimes we get requests from schools and when we donate, we donate to more than seven girls, because the aim is to provide them with something that is crucial to their hygiene,” the businesswoman said.

“The programme is part of the brand. Sometimes it is difficult to get donations from people because of the economic conditions, but there are those that do their best to help because they know how important it is to preserve young girl’s dignities by helping them get access to sanitary pads.”