Let there be light

Most of Tshivhula customers are traditional healers, sangomas and prophets.

Even though he graduated with a degree in psychology, Makati Tshivhula could not find employment. He got an opportunity to work in the candle industry, and since then, his future has never looked brighter. Tshivhula is the owner of The Light Candles, which he registered in August 2020 launched in February this year.

The company is based in Pimville in Soweto.

It specialises in all kinds of candles, such as scented, dinner and normal candles that come in various colours. Tshivhula said that thanks to funding from a silent partner, he was able to launch the business.

“The investor approached me just after I had left the candle company that I was working for at that time,” he said. “After starting the company, I discovered how lucrative the candle-making business is,” Tshivhula told Vutivi News that most of his customers were traditional healers, sangomas and prophets.

“Working with them has taught me so much about the symbolism of the colours of the candles and what they are used for,” he said. White candles represented purity and were used to pray and bring light into the person’s life, Tshivhula explained.

Red candles symbolised love and were sometimes used to reignite passion in a relationship or for fertility, while yellow candles were used to pray for material wealth and increased a person’s chances of success. He said blue candles were for emotional and spiritual stability, and peace and justice.

Tshivhula said that when he started this business, he had a vision of owning something that was his own.

“We are living in a time where being employed means that you are only a paycheque away from unemployment,” he said. “I know how it feels to struggle to get a job, so I knew that with this business I would be able to have a source of income controlled by my own efforts.”

One of the difficulties he experienced in running his business, was equipment. 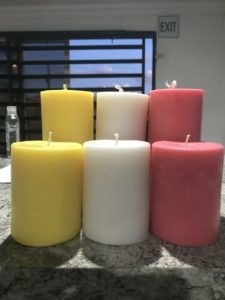 “Candle-making equipment is very expensive, and sometimes I cannot meet the demand due to the machinery I have,” Tshivhula said. However, his business continues to grow every day.

Tshivhula said he had received orders from all parts of the country as well as Swaziland.

“My dream is to be one of the biggest suppliers of candles in the country. I want to supply big retailers and see my brand on their shelves,” he said.

“I also plan on opening other business ventures because I believe that the candle business is a stepping stone to greater entrepreneurial opportunities.”