by Tebogo Mokwena
in Small Business
84 1
0

Before Ntokozo Madlala opened his salons in Cape Town, he ensured that he had the know-how to run a business. He told Vutivi News that in less than two years, he now has two successful salons in Khayelitsha and employes 25 people. For Shazz Salon to become a reality in 2020, Madlala who had worked in the industry for five years, sold sneakers for six months.

This gave him the funds to purchase his first container and open a salon. “I love business, working with people and being able to work towards a goal and achieve it. And this is something that pushes me to become a better businessman,” he said. Madlala learned various skills while working for three salons. 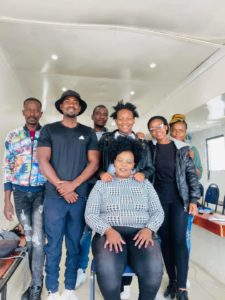 “I learned how to be neat and presentable, robust and creative at my first salon job,” he said. “I then learned how to deliver quality customer service from my second job, and at my third job I learned how to develop and foster good relationships with my clients and to make them feel welcome.”

The salon owner also read many books on how to grow a business, which helped him develop his salons. His business started blooming after dreadlocks came back into fashion in Khayelitsha, which ensured that he had many clients and staffers. However, when he started out, he had only two employees who wanted to quit as it was tough going. “They believed in me and chose to stick it out with me,” Madlala said.

He believes this is because of the environment he creates at work. “Everyone, from the clients to my employees, feels at home when they enter my salons,” Madlala said. “We laugh and joke around and make a working environment that will enable my employees to be encouraged enough to start their own businesses,” Madlala said his business was also a success because he loved working with people and was passionate about job creation.

“Here in Khayelitsha there is a lot of employment, so my dream is to open six salons so that I can not only create jobs but give those that have the desire to start their own businesses the necessary tools and skills needed to venture out on their own,” he told Vutivi News.