Joburg entrepreneur changes strategy in the face of Covid-19

While many business owners who closed their doors because of the Covid-19 pandemic did not bounce back, Tondani Makhuva saw the loss as an opportunity to start afresh. Having previously owned two bed & breakfast businesses after a career in the corporate world, she is now the founder of Africa Pride Collection, which trades as Little Cuteez and designs personalised gifts.

“When business didn’t do well during the early stages of the pandemic, I started selling my properties and looked for something to do,” she told Vutivi News. Makhuva developed an interest in African-styled clothing and researched what type of garments she wanted to specialise in. “I wanted to start designing Venda-styled attire, and when I was on the internet doing research I saw flip-flops which were designed with Ankara fabric,” she said. 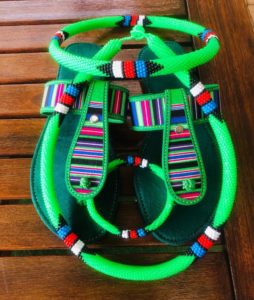 “I developed an interest in that fabric, and I wanted to print flip-flops with traditional fabric.” During her research, the Limpopo native who is based in Johannesburg learned about sublimation printing and decided this was the best technique to fabricate her products. Sublimation printing is a specific process that first involves printing onto a special sheet of paper and then transferring that image onto another material

“I took the money that I made from selling my properties and started the business last year in July,” she said. Makhuva’s business designs shoes, coasters, cups, flip-flops and accessories such as headbands. She also sources beads and makes accessories from them such as bangles, necklaces and headbands. She sells her products on Takealot and social media, with most of her customers based in Limpopo.

Makhuva said that with her background in the ICT sector, she was originally planning on outsourcing the products she sells from different designers, building a website and selling them. “Getting this done was an issue because suppliers in Limpopo would not keep their service level agreement and would not deliver orders… always with excuses,” she said.

The business owner has also had to deal with rising petrol prices and the cost of living, which resulted in an increase in courier pricing. “One of the challenges in dealing with Takealot for me is having to deal with the constantly rising prices of petrol, which means I get to pay more for courier services,” she said.

“Sometimes I operate at a loss.” However, Makhuva told Vutivi News that she considered selling her products on Takealot as one of her biggest achievements. “I would not be where I am today had it not been for Takealot,” she said. “When my business started it wasn’t that well known, but Takealot enabled me to put my product on the map,” Makhuva said.

She also attends various markets in Limpopo, which has helped to grow her brand. “I am planning on buying more machinery so that I can start designing and making clothes using African fabric, and also employ people to whom I can impart these skills.” While Makhuva’s move into another sector has come with challenges, changing businesses has been worth it. In March this year, the Tourism Business Council of SA told Parliament’s Portfolio Committee on Tourism that the sector was operating at between 30% and 40% capacity in comparison to 2019.