The ginger beer is mainly distributed in Tshwane

Thabang Tseko and Benny Mooka showing off their ginger beer

In certain South African cultures, ginger beer, which is commonly known as gemmer, is traditionally mixed and prepared by women. However, entrepreneurs and business partners Thabang Tseko, 29, and Benny Mooka, 28, decided to break the norm by becoming ginger beer men.

The pair, who are based in Tshwane North, are the founders of Monate Gemmer.

Tseko told Vutivi News that he and Mooka decided to start the business in January last year because he was struggling to make money. “It was difficult for me to get a job so I thought that I can start something for myself,” he said. “I met Benny at an event while he was working for a promotion company and I was facilitating events. I saw that he loved entrepreneurship and we clicked.”

Mooka said the two also wanted to bring back the original taste of non-alcoholic ginger beer. “We saw the need to keep the traditional recipe of gemmer alive and thought it should come in the taste people are used to. We then developed and packaged it and brought it into the market,” he explained.

“We entered a market where people were tired of drinking ginger beer that does not taste like the original, complaining that the other types of gemmer have an aftertaste.” Tseko said that when they launched, they were a hit.

“The reception was very good from people,” he said.

“People were very shocked that men were selling and making gemmer. Their support and positive reception, is where we draw our strength.” Mooka said they did not have full-time staffers, but instead used salespeople. “We have sales agents who sell the ginger beer who are not permanent and are earning on commission,” he said.

The ginger beer is currently mainly distributed in Tshwane. 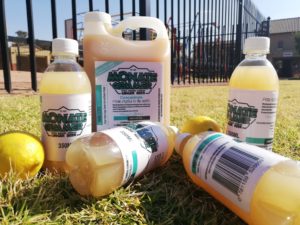 “We do have people who are interested in our products in other provinces,” Mooka said.“If you are interested, we sit down and discuss a distribution deal… for instance, there is a lady that wants to distribute from Limpopo.” There have been some stumbling blocks such as a lack of proper machinery to meet the increasing demand for their product

“We want to expand and then get machinery, because sometimes certain supermarkets will order 1000 bottles every week, and we need the machinery to meet such an order,” Mooka said. Tseko said that the government had been of great help by assisting them with product testing through the Small Enterprise Development Agency.

“When we started the product wasn’t tested because testing costs a lot of money, which we didn’t have,” he said. Tseko said he loved seeing locals drinking their ginger beer.

“It takes courage to take a product from one level of consumption to another. Seeing someone buy our product is an achievement on its own.”