Growing up in an informal settlement was difficult for Kabelo Rakoena, who was constantly surrounded by all kinds of rubbish. As a boy, he had grown accustomed to cleaning his environment in order to survive financially.

Now as a 21-year-old adult, Rakoena has tapped into his survivalist mentality and started a thriving waste management company. Rakoena is originally from Dennilton in Mpumalanga, but now lives in Tshwane. He is the founder of Kabelo Waste Removal and Recycling, a business he started in 2018 when he was still in high school. 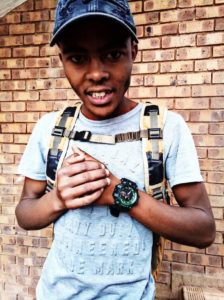 It operates mainly in Pienaarspoort and Nellmapius. Rakoena told Vutivi News that he collected waste from 450 houses in the informal settlements and had hired four employees. He said they also visited townships in the surrounding areas that use municipal waste removal services and cleaned their dustbins.

“We give them plastics which we collect every week for a fee of R5. Because we don’t have a vehicle, we use wheelbarrows to collect the rubbish, and transport it to the site using a truck we hire for that purpose,” he said. Rakoena said that his mother had inspired him to get into the waste management business.

“My late mother had a day-care centre and the diapers used to create a mess. She would encourage me to do something about it and to collect not only those diapers but also other rubbish that was found almost everywhere in the informal settlement,” he explained.

“I was also motivated by the fact that there were many illegal dumping sites in the informal settlement which resulted in sicknesses of various kinds. Children also didn’t have a place to play, so I desired to clear the place up so that they can play, and to improve the general hygiene of the area.”

Rakoena said that when he started his business, it was initially difficult to convince residents to collect their rubbish as many of them were reluctant. He started out by supplying 14 houses. But through “dedication and consistency”, he soon had other clients.

He said his business was also the reason he matriculated. 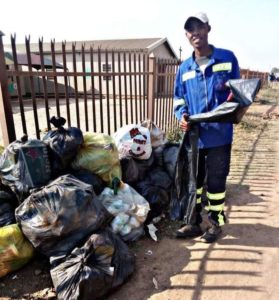 “It helped me to attend extra classes, buy food for myself and travel to school,” Rakoena said. “Thanks to the business, I am now able to study for a course in Business Management at the University of South Africa.” Rakoena told Vutivi News that legal dumping sites were essential in helping improve the health of residents and reducing rates of infestations that were common in townships.

“Places like informal settlements don’t have an allocated dumping site, so you would find papers and rubbish all over the place,” he said. “It also helps reduce air pollution, because one way these residents get rid of rubbish is to burn it, which results in clouds of black smoke entering people’s homes and lungs.”