one of Mapula Ramothwala's antiperspirant range for children

Mapula Ramothwala decided it was time to launch an antiperspirant range for children after she could not find anything suitable for her son to use. Ramothwala, who is from Soshanguve in Tshwane, started Kiddo Cool in 2019. The company sells anti-perspirant roll-ons that come in three fragrances and a foot powder infused with lemongrass. 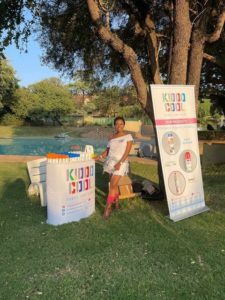 The products are for children aged between seven and 13, and their main aim is to restore the confidence of youngsters. Ramothwala told Vutivi News that Kiddo Cool masked a child’s body odour and did not contain any toxic ingredients. “When my son came back from soccer practice, I noticed that he had an unpleasant smell emanating from him, accompanied by sweaty armpits. I found it odd that a child would sweat so profusely, so I went about looking for deodorant for my son,” she explained.

Whenever I entered a pharmacy or a shop, they would give me some home remedy that did not work or that I didn’t think would work for me. I soon came to the realisation that there was no anti-perspirant deodorant in any form for pre-teen children.”

Ramothwala spotted a gap in the market and decided to research the formula for a deodorant. I took my formula to a chemist in the area to assist with the formulation of the product, she said. I realised that I was on to something, and it fast dawned upon me that I needed funds to manufacture more. Ramothwala approached an acquaintance and sold him a part of her company’s shares.

Once she received the cash injection, the businesswoman started marketing and manufacturing her products at a factory in Soshanguve. It became apparent that a lot of parents were looking for a product of this nature because, in a few short months, I was able to sell a lot of roll-ons and foot powders. Many of my customers told me that I was a godsend, she told Vutivi News. 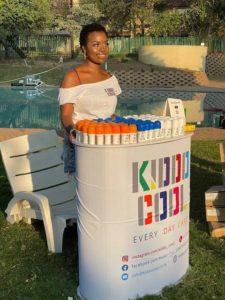 Ramothwala said that because her products were in high demand, she had scaled up. She had customers in every province and delivered their orders via courier. I also have two independent pharmacies in Polokwane, Limpopo, and in Tshwane, Gauteng, that distribute the products for me. Ramothwala said that while the national lockdown did have a negative impact on her business, she was able to stay afloat thanks to her customer base.

Because my customers were loyal, they would buy roll-ons, but not in the same quantities. However, the orders I got kept the business running, she said. As soon as the country dropped to lockdown level 3, her business started picking up. The businesswoman will introduce other fragrances next month and is planning on expanding her range of products for pre-teens.

What separates my product from others is the fact that it is made specifically for children. It was very saddening to hear stories from my customers about how their children would suffer from smelly feet and armpits, and they thought that their children were sick,” she said.

It brought them great comfort knowing that they were not the only ones, and they have sworn loyalty to my brand because it has brought them immense relief.