by Tebogo Mokwena
in Small Business
92 1
0

Living with a disability did not stop Phokela Mametja from opening doors, and he now owns a passenger transport business that gets people home in the most comfortable way possible. Mametja, who launched Phokela Tours in 2009, told Vutivi News he has always loved transporting people and starting a business that had allowed him to create jobs, gave him a sense of fulfillment every time he goes to sleep. 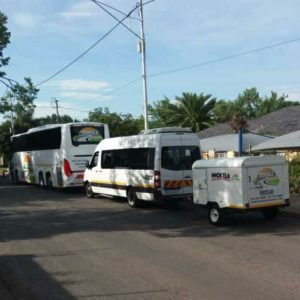 Mametja started Phokela Tours after being retrenched from a car rental company. He used his severance package to buy a Quantum minibus as he saw a gap in the market for people travelling to his home province, Limpopo. “In those days, people would travel to Polokwane every Friday and would arrive at night, leaving them stranded because there would be no local taxis,” he said. “I then decided to take advantage of this and provide transport that not only commutes people to and from Polokwane but also drops them off at home.”

However, this was not the only special treatment offered by his business. “We also provided commuters with snacks and beverages, and since many taxis travelling to Polokwane do not provide this service, people flocked to us,” he said. “We then went from owning one Quantum to a few and buying Sprinter minibuses until we expanded to using buses.”

The company now had four luxurious 55-seater buses and seven 60-seater buses that were semi luxurious. “The super-lux buses have toilets and fridges inside for the convenience of the commuters, Mametja said. Today, the business, which is based in Olifantsfontein in Ekurhuleni, not only ferries passengers to other provinces, but it also transports people to funerals and stokvel events. Mametja had 38 people employees, but 14 of them were retrenched due to Covid-19 lockdowns. 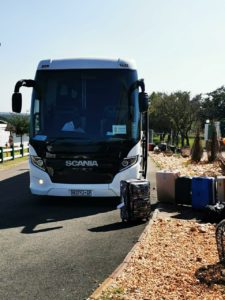 He also has another business called Kgorong Café and Carwash, which he opened in 2018, and employs 10 people. “So many people are unemployed, and it is painful when you see many people not being able to take care of their families,” Mametja said. “Seeing the look on the faces of my employees and their families when they know how much of a difference I make in their lives, brings me much joy.”

Mametja was diagnosed with polio when he was eight years old and has been on crutches most of his life. “It’s so satisfying when I go to presentations and meetings and they expect the owner of Phokela Tours to be someone of great physical stature and are always shocked when they see that I, a disabled person, owns such a big company,” he said. “It actually makes me feel like a bit of a celebrity because I know that wherever I go I get attention because they’re not expecting a disabled person to be so successful!”