The company delivers products from local supermarkets, eateries and tailors on bicycles

The bikes that are being used by Cloudy Deliveries

How often have you wanted to purchase something from a shop, but for whatever reason, you cannot get there?

Cloudy Deliveries in Langa, Cape Town, was launched for exactly this reason. Colin Mkosi, 23, and Sive Cabuko, 22, established the startup in 2020. According to Mkosi, the idea came about while he was a student. “On a particular day I was studying, and I wanted something from the shop, but I couldn’t go to the shops because I didn’t have the time to go out,” he told Vutivi News. 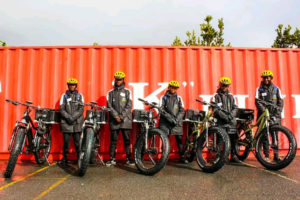 “I realised how necessary it would be to develop a service where people can get what they need without having to leave the comfort of their homes.” The employees deliver products from local supermarkets, eateries and tailors on bicycles. The business initially had 22 employees, but the number was reduced to 15 because it was difficult to manage a large contingent of staff members, Mkosi said.

“My team loves cycling and they grew up on the streets of Langa and know it like the back of their hands, so much so, that they don’t need GPS to move around,” he said. Mkosi said that when the business started, they had to use second-hand bicycles. But they broke down after a few deliveries. He said that social media had helped the business secure new bicycles. Three companies donated 22 bicycles last year.

“Thanks to these donations, we were able to buy uniforms and bicycle maintenance equipment and were able to expand our services to include collecting deliveries from stores around Langa,” he said. “The only challenge we have now is space, as our container is surrounded by shacks and we do not have space big enough to expand our operations and cover more areas surrounding Langa.” 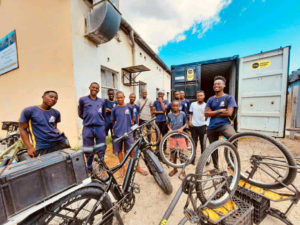 Mkosi said his team was especially passionate about helping the elderly. “They get really excited and happy when we do these deliveries from them because they do not have to go to supermarkets and stand in long lines,” he said.

Mkosi said they were currently looking to acquire a bigger piece of land to expand the enterprise’s operations. They also wanted to upgrade from bicycles to scooters and vans, as this would enable them to serve nearby townships including Khayelitsha, Gugulethu and Imizamo Yethu.