by Tebogo Mokwena
in Small Business
94 6
0

One of the founders of AfrikaPro cleaning services Katlego Gopane

One of the most crucial lessons that business partners Lesego Ntono and Katlego Gopane learned is to work with what they have in order to be successful. This helped them start and grow their cleaning business as they did not have the R500,000 they needed to start their business. AfrikaPro Cleaning Services opened its doors this year after Ntono convinced Gopane to join him in the venture. But before that, the men did extensive research on what it would cost to start the business and what would be needed.

“Katlego has experience in the cleaning sector, as he has experience working for a property company as a facility manager, which includes cleaning the property,” Ntono told Vutivi News. “He also worked for a cleaning services company but was frustrated while working there. So, I approached him with the idea of starting a cleaning company, and asked him how much it costs, what associations to join and what sort of compliance is needed for the venture.”

Ntono said that he used about R80,000 to start the businesses. “Since I already had a van, I spent R25,000 to fix it, and I spent R18,000 and R5000 respectively for two machines. The remaining R30,000 went to other costs and expenses.” The business is a subsidiary of AfrikaPro Holdings, which was founded in 2020. AfrikaPro Holdings is a company owned by Ntono and Gopane, and they provide services including property valuations, constructions and supplies.

Ntono said the cleaning service business operated throughout Gauteng and the North West. It provides cleaning services for offices, homes, shops and government departments. It also provides pest control, gardening services, mobile carwash services and disinfecting services. According to Ntono, one of their biggest wins was that they were able to obtain indemnity insurance with Dial Direct. 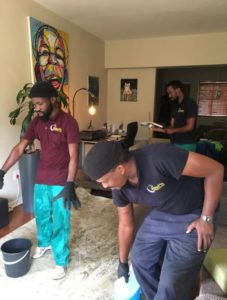 “This insures the products of our customers, so that in the event where, for example, we accidentally damage a couch or a bed or a piece of furniture, they are covered,” he said. “In the past, this was troublesome as we had to fork out money from our own pocket to replace the broken items,” Gopane told Vutivi News that one of their main challenges was marketing.

“Marketing is expensive, and as a small business, you need to be aggressive. We use channels like social media influencers to market our products, and a Twitter influencer would charge R3,500 for a tweet,” he explained. “It is rather pricey, but it is worth it as one tweet would have a vastly positive impact on our business, thereby resulting in more customers.” Gopane said another challenge was that companies did not settle their bills on time.

“We struggle to get them to pay us, as cashflow is very important for a small business.” Despite these hurdles, Ntono said that creating employment for the four people made it worth it. There was also an opportunity for the business to grow due to the company’s growing popularity and calls for its services in other provinces, he said. Their goal was to have at least one branch in every province in the next decade.