After seeing how his parents’ trading store enabled his family to go to school and provided employment in his community, Thato Pholoholo decided to follow in his parents’ footsteps. Growing up in Zeerust in the North West and watching his parents help put food on people’s tables fueled his entrepreneurial spirit and he started Villageboy Foods.

Pholoholo told Vutivi News that he started his company in Centurion in Gauteng in 2019 after he left the corporate world where he had honed his skills as a salesman. “I was a sales advisor at Outsurance and Massmart. I always enjoyed the thrill of sales and of making a sale, so I used money that I saved to start my business,” he said. Villageboy Foods specialises in delivering pre-marinated and pre-cooked pork ribs, avocados, hardbody chicken, mince, boerewors, lamb and other meat. 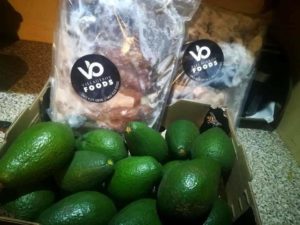 The business operates in Gauteng and in the North West. “I started by supplying people with avocados because I saw how expensive they were in supermarkets and how much they were in high demand due to their nutritional benefits,” he said. “Soon I started branching out to include other products like different types of meat.”

Pholoholo said Villageboys’ full and half hampers, which cost R1199 and R649, were the most popular as they catered for small families and those living alone. His meat is supplied by farmers and abattoirs in the North West and Limpopo. Pholoholo, who employs one person, said running a business was a 24-hour venture. “I sleep at 11 pm and wake up at 2 am to do research on the best places to source my products in order to provide quality products while helping my customers save some (money).”

He said the lockdown was a blessing in disguise for him as business picked up. “Because many people couldn’t go to the stores and do groceries, they depended on me and my business, which saw a boom in those days,” he said. But it has not always been easy to get new customers. “I learned that out of 10 customers I would approach, four would respond and out of that four, two would only buy,” he said.

“I manage to overcome these difficulties with a spirit of resilience and self-motivation. I also believe that if you have 10 customers a day and make them happy, then it will translate to more customers to make happy, and that is how I do business,” the businessman said. And Pholoholo believes he is on the right track with his business being recognised by Proudly South African.