Bringing the world to South Africa

by Tebogo Mokwena
in Small Business
87 5
0

One of the vehicles used by Victory Travel Agency

Working in the United States and hearing what locals thought about South Africa, concerned Nkosi Mvelase. When he realised that the Americans he interacted with, could not tell the difference between Africa and South Africa – a common phenomenon across the world – he decided it was time to change their perspective.

He returned to South Africa and opened Victories Travel Agency. Mvelase, who is from KwaMhlanga in Mpumalanga, founded his business in 2018. 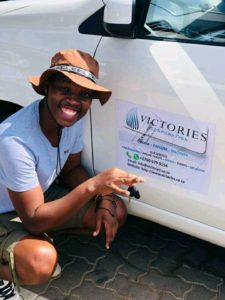 The main office is in Tshwane and he recently opened a branch in KwaMhlanga.

Victories Travel Agency offers car hire, flight and hotel bookings, as well as conference and events management and tourism packages. Mvelase, who studied Tourism Management at the Tshwane University of Technology, told Vutivi News he went to America in late 2014 to work for Disney World.

“When I got there, found people not understanding about the various countries in Africa,” he said. “I became interested in educating internationals through the travel agency by offering them tourism packages, car rentals and flights just to educate the world about the African continent.

“We have a very beautiful land and a diverse culture in Africa, and our own country is unique in that it has 11 official languages,” Mvelase said. He said that his agency made it a point to ask customers about their budget so that they could have tailor-made packages irrespective of what they could afford.

“We believe that whether you’re from the lower, middle or upper classes of society you deserve a breath of fresh air with your family,” the business owner said. “We also take our guests to tourist attractions that are not recognised.”

Mvelase told Vutivi news it had not been plain sailing. “Aside from financial support, we used to face the problem of people damaging cars and being unable to pay for the damages. That affected our financial stability in that our profits dropped drastically,” he said.

“We developed a system where we take a high deposit which will be returned to the customer if the car is found to be in the same condition it was rented.” The agency also required three months of bank statements and proof of employment to ensure that customers would be able to pay for any damages incurred.

The agency currently had four cars that could be rented by tourists and locals. “This service helps those that do not have cars, saving them from having to use a relative’s car for a day,” he said.