A woman in a man’s world

Just like a cat gets its claws into its prey, so too does Sindiswa Mbonambi about her dreams and aspirations. Her business, Phaha Security Company, which has the African wildcat as part of its logo, is a testament to how Mbonambi has never thrown in the towel despite her many hardships. Mbonambi started her journey in the security sector in 2016 when she was a partner at a security company that has since shut down after they parted ways. Mbonambi told Vutivi News that she got involved in the sector because she wanted to change perceptions around security guards.

“Whenever people think of security guards, they think they are uneducated and that it’s a low-end job for school dropouts,” she said. “I wanted to remind them that security guards are their first line of defence because, in an office space, security guards are the first and last people workers get to see.” Mbonambi, who started her company in Boksburg, Ekurhuleni, in 2020, said that she has never supported the clichés around women and the world of work. “Just like the eagle which flies against the wind, I went against the common flow and did something that women are not thought to be capable of doing,” she said. 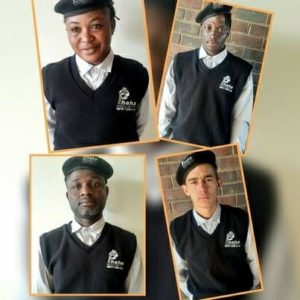 “I wanted to break the stereotypes that women are incapable of being in armed response.” The company employed 20 security personnel and most of them were women, which Mbonambi said was key to her business strategy. “I believe that in a conflict situation, men are more likely to be aggressive and thus women are able to soothe the situation and dilute the conflict better than men,” she explained. “I also wanted to break the myth that in the security sector women only work in admin or control rooms.” However, her journey has not been without gender discrimination.

“We have found ourselves in situations where men always want to push our buttons because the armed response teams are made up of women, but we are trained to focus on the goal and remain calm at all costs,” she said. And Mbonambi is at the top of her game. Not only does she own a security company, but she also co-owns a mobile carwash and owns a mobile beauty spa. “The carwash is called Megashift Mobile Carwash and it was launched a few months ago,” she said. “The beauty spa, Mai Kingdom Spa Boutique, was launched in 2015 after I partnered with a few women in a previous spa and decided to branch out on my own.”

Mbonambi said a reason her businesses were successful, was that she gave her carwash and spa customers signature gifts. “People want to be acknowledged and appreciated, so I thought that thanking them alone was not enough and decided to take it a step forward,” she told Vutivi News. Mbonambi also thanked her partner for always being at her side. “Whenever I feel like giving up, he pushes me and encourages me and reminds me of my goals and how I want to get to the top,” she said. “I have failed so many times and with these businesses I told myself that I owe it to myself to succeed, and here I am, living the success I have always imagined.”