Covid-19 led the women to start a new business

Instead of leaving the taxi industry because of the severe financial pounding, it took due to the Covid-19 pandemic, three women taxi owners decided it was time to get creative. Joyce Hlobo, Joyce Nkosi and Mavis Ndlela have launched an upholstery business for taxis after being in the industry for more than two decades.

Hlobo told Vutivi News that starting How Long Services would not have been possible without the women’s vast experience and network of contacts. And with the help of South Beach and North Beach Taxi Association chairperson Yusuf Khalifa and their colleagues in the industry, she said their business was on the road to rapid success. 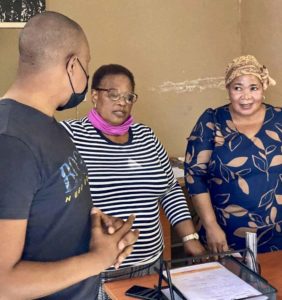 “Since Covid-19 broke out, profits started to drop drastically, so much so that we couldn’t afford car instalments anymore. Some of us lost cars, and we then decided to start this upholstery business for taxis because this is our industry,” Hlobo said. “We cover Siyaya, HiAce, Toyota and Quantum taxis. We also do private cars and patchwork, upholster the taxi floor and cover the rest of the interior of the taxi or car.”

The women hired two upholsterers, who Hlobo lauded for helping get their business on the right track. “We have two skilled employees that are remarkably proficient in their craft,” she said.

“We employed them because we wanted them to do something for themselves and be able to provide for their families.” On average, they work on 10 taxis a week. “When three or four hours pass without a customer, we strategise. We call our industry friends and colleagues to come to do upholstery so that they can empower us,” the business owner said.

“Indeed they listen because they even ask us to upholster their taxis in their yards. We also make specials once a week, distribute pamphlets and call people from various sectors.” 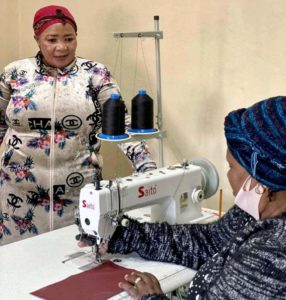 Hlobo told Vutivi News that when she started out in the taxi business, it was dominated by men. “I learned a lot from men in the industry who taught me about income, expenditure and savings and administration,” she said. “I was taught that one doesn’t recklessly spend profits. I was able to buy a house, a car and take my children to school.”

Hlobo said that men like Khalifa were a reason why more women were now taxi owners and drivers. “We are indebted to him because he is a staunch supporter of equal rights between men and women and does not like seeing women suffer,” she said.

“Their help has shown us that if men and women work together, a lot can be achieved.”