Mbali Nyawo, who is the first woman to own a tyre-fitting business in a Gauteng township, has always pushed herself to think out the box. She told Vutivi News that she has never enjoyed following the crowd, and that was why she opened iMbali Tyre Shop in Orlando, Soweto. Originally from KwaZulu-Natal, Nyawo co-founded the business with her younger brother, Sandile.

The businesswoman studied mechanical engineering because of her passion for machines, engines and mechanics. She had always wanted her own business. “I did some research, did a business plan and presented it to my younger brother because I wanted a partner to have as a sounding board so as not to be blind-sided, and also because I needed assistance with financing,” she said. “I also researched the area and found out which cars are prominent in the area, considering the economic circumstances of the residents.”

The business has four employees. It fits and aligns tyres, and it also fixes brakes. “We rely on walk-ins for tyre balance, brake changes and other services we offer,” she said. Nyawo’s love for machines started in high school, where she excelled in maths and science. “At first I thought that I wanted to go into the biomedical field, but after career guidance, I realised I was more of a person that solves infrastructural problems, so I went to university and studied mechanical engineering,” she said. 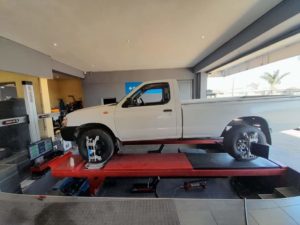 After moving to Johannesburg five years ago, she started her business in 2021. “The tyre industry is mostly male-dominated, and a lot of the shops are franchised and when you look at franchise locations, they are always located in cities,” she said. “I wanted to do something different from the norm where the township residents can experience service at their doorstep and not compromise on quality. “The goal is as Africans we need to start upgrading townships, so people don’t have to go outside of townships for businesses and services,” she also said.

Nyawo said a reason why her business performed well, was because it offered the same quality services as her larger counterparts for a much cheaper price. She told Vutivi News that one of her challenges was getting contracts. “We need to get those contracts from entities like the South African Police Service, Prasa and others and it is very difficult because procurement is a long process.” However, in the meantime, Nyawo’s goal is to open more branches in townships across the country.