She ventured into water purification when she saw communities suffer

by Tebogo Mokwena
in Small Business
66 4
0

A shortage of clean, drinkable and mud-free water drove Charlotte Mosimane to start producing bottled water. And as result, she has quenched the thirst of some communities in the North West, as well as her thirst for success.

Mosimane is the founder of Crystal Clear Bar Water Holdings, which is based in Rustenburg. She supplies water in Zeerust, where she is originally from, as well as Rustenburg and Mahikeng. Mosimane told Vutivi News that after launching her business in 2019, she found her passion in supplying communities with one of the most critical substances to sustain life.

“Rustenburg has a problem regarding unclean water and a shortage of water. We can go a week without water and when the municipality restores the water, the water is brown and muddy,” she said.“Seeing members of the community struggle with such a basic need encouraged me to venture into water purification.” 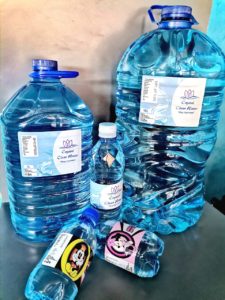 The businesswoman uses a specific treatment process to purify her water. “Reverse osmosis discards unwanted particles like soil and small particles from the water to produce finer and clean water,” she said. Mosimane packages the water in different quantities, depending on the size of an order, which she gets from companies, people who hold events and individual clients.

She said that starting the business was an easy decision as she had always wanted to do something for herself. “I was working at a store and asked myself if this is all I wanted to do in my life? Even though I always saw myself tied down to a nine-to-five job, I felt very dissatisfied,” Mosimane said.

Since leaving retail, she has never looked back.

“I now have a walk-in store in Rustenburg and my aim is to create employment in the area,” she said. “In order to stand out in this sector, one has to depend on good customer service and quality products.” Her biggest order has been 1000 units of water, which she believes is her greatest achievement so far. “I was honoured. That person could have gone to other companies, but they chose me,” she said.

Mosimane said that the lessons she learned during the lockdown toughened her up as a businesswoman. “I learned perseverance and how not to depend on one income stream. I also learned that even in the darkest of days, there is always hope for the future,” she said.