Shisanyamas with a different view

Sthembiso Khumalo believes he hit the jackpot when he started designing containers with rooftop sections. He told Vutivi News that most of his clients were shisanyama owners from across the country. Born and bred in Soweto, Khumalo owns CP Container Projects, which he opened in 2016. He currently has 11 employees.

Khumalo, who is an electrical engineer, said he started out with his containers when he started selling tobacco. “I initially started out as an entrepreneur specialising in tobacco. I wanted premises to host my business. My first project was my store because I have always had the vision of letting people enjoy the experience of being on top of a container,” he said. 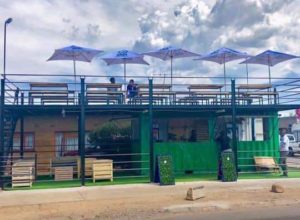 “People would come to my store and enjoy the experience of smoking upstairs, and it was successful, even though people didn’t believe in it.” He said that his designs depended on what clients needed.

“Before we design, we go to the township in question, study other shisanyamas and try to understand the lifestyle of the township. Our design is then inspired by the local culture.” Khumalo said that he had gained a number of skills while running his business.

“I didn’t know how to weld, and I had to learn how to weld on my first project. Now our employees share skills, where the welder teaches other employees to weld. I design and paint the containers and add the trimming,” he explained. Khumalo said he also learned about the importance of providing an accurate quotation, which was something he believed many startups struggled with.

“I either used to over or under quote my customers. I would provide a certain fee on the quotation and I would later come to learn that it is too low because of added costs like traveling, accommodation, labour and material,” he told Vutivi News.

He said his company after three deals, which included covering the total costs of a project including material and labour, designing a container someone already had, or hiring his workers. Khumalo told Vutivi News that he had an entrepreneurial spirit when he was teens already. 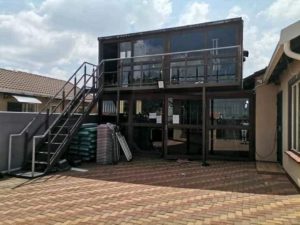 “When I was in high school and my mother and I moved to Newtown from Mzimhlophe, I started operating a public-phone service and started with one phone, which then expanded to three phones,” he said.

“After that, I branched out in different entrepreneurial directions (including selling curtains). Whenever someone would mention to my mother that she is in need of something, I would chip in and convince my mother’s visitor that I can supply that product.

“That cemented a reputation for being able to deliver according to my promise, regardless of how extravagant,” the businessman said. He said his greatest feeling was a “happy client”.