The motor industry has long been a male dominated trade but women like Carol Mathebula from White River in Mpumalanga are changing this. Mathebula recently established a panel beating business known as Carrol Motor Body Repair. The South African Motor’s Body Repair Association (SAMBRA) says there are less than 50 women who own panel beating businesses in the country.

Western Cape has eight, KwaZulu Natal has 16, and Gauteng is topping the list with 17, while Eastern Cape has only three. Statistics for other provinces were not immediately available. “This is true women are not many in this kind of the industry. We have never tracked the specific number of businesses owned by women within the SAMBRA membership but there are many in the Indian community and some in the coloured communities.

“I would venture to say that in terms of representation, whilst there are some, there is much work to do to attract a representative number of black African women into the sector as business owners,” said Sambra national director Richard Green. Before she started her company, she worked for a motor body repair company in Mbombela where she was a spray painter. “After I worked in this industry for more than 20 years, I finally decided to use the experience that I have accumulated to start my business in this male-dominated industry. I wanted to start it many years ago, but I was not sure if it will succeed since there was no woman I knew who ventured into that kind of business,” Mathebula explained.

It was during last years’ lockdown when she decided to research her ideal business and found that there was a market for it. She said since many people were not working during the lockdown they saw it as an opportunity to fix their vehicles. The business started to operate last year in October, where she used her savings. Growing up in rural areas Mathebula wanted to complete her matric and go to university, but all her dreams were shattered when she fell pregnant at the age of 16 and dropped out of school. Her brother assisted her to get a job in a company where he was also employed at. 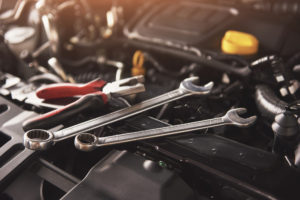 She learned fast everything they taught her and impressed her employers and customers. “I remember there was a day where I had to paint a car alone, I locked myself inside a storeroom so that there was no one monitoring me as I was uncomfortable. After a few hours, I unlocked the door and everyone was amazed because the car was well painted and looked like a new car. Whenever I did something my colleagues and customers used to commend me and that motivated me to work harder,” she said.

She cited that she never had a problem in the industry because all the men she came across in the line of duty were very supportive. Her company has employed three men and also offers training to several women who wish to emulate her. She added that in the next five years she wants to see her company offering services to big companies instead of individual clients.

Green added that the panel beating business is highly technical and women should have either come from a technical background or employ a manager who can guide that part of the production process which is so critical to success in this sector. “There are key skills needed to run a successful panel beating business and without those the chances of long-term success are slim and these would include, e.g. motor damage estimation skills.”

Green said Sambra assists anyone who needs assistance or guidance when entering the sector and makes sure that they understand the routes to the market and also put prospective entrepreneurs in touch with the non-governmental organisation that manages funds that can assist them. The vehicle industry which panel beating falls under contributes about seven percent to the country’s GDP. One of her customers, Johannes Ngwane, who runs a business selling second hand cars, said he was happy about her service.

“My business is to buy old vehicles, fix and sell them. I started working with her when she was still with her previous employer. When she was not at work she used to panelbeat my cars very well that is why even now I am still with her,” said Ngwane. Mpumalanga Small Enterprise Development Agency (SEDA) provincial manager Mashiba Kgole has urged Mathebula and other women who run small businesses, especially those that were previously male-dominated to contact SEDA for assistance to grow their businesses. “It is a good thing to see women venturing to businesses that were previously male-dominated. This lady must contact our office and she stands a good chance of being supported by SEDA.”
– Mukurukuru Media

137
No Result
View All Result