Ezekiel Moimane, an engineering graduate and entrepreneur who has manufactured an automatic hand sanitising machine that is user- friendly to persons with disabilities says he will donate some of the machines to local disability centres and the old age homes around Phalaborwa, Limpopo and at some parts of Mpumalanga.

Moimane said he manufactured the machine after realising that many disabled people especially those based in the rural areas were struggling to use the widely available pedal sanitising machine. “This machine is very user-friendly, a person just places their hands and it detects them and automatically sanitises them,” explained Moimane. When using this device just put your hands below its nozzle, and the sensor will detect you and pour out droplets of hand sanitiser.

According to Moimane, there are a few sanitising machines that operate like that in the country and they are very expensive and not available in rural areas. He said when he was researching this project he was shocked by many incidents where the elders and the persons with disabilities were struggling to use the pedal-orientated sanitising machine.

The entrepreneur said the spread of Covid-19 cases encouraged him to make the machine. “I also want to play a part in a fight against the spreading of Covid-19. I know it is not much but I will be happy to be among those who contributed.” Recent statistics released by the National Department of Health shows that South Africa has so far recorded 53 736 deaths due to the disease. Shabirihi, director at the South African Medical Research Council and professor of vaccinology at the University of Witwatersrand predicted that the virus might be present until the end of 2022.

South Africa is one of the countries that have many people with disabilities in the world. According to the Census 2011 Disability Report, there were more than 2.8 million persons with disability living in South Africa.
Disabled People South Africa’s Patrick Mahlakwana has welcomed the news that Moimane will donate the machines. 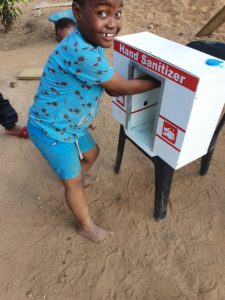 “We are happy that the machines will be donated and be used by people with disability, but let me correct something here, everyone will benefit not us only. There are people, who are not disabled, but suffering from different diseases such as diabetes who are sometimes struggling to use their legs to press the pedal of the sanitising machines that are mostly found at the door of big shops in the country,” said Mahlakwana.

“This guy needs to be supported because his machine will feel the gap that exists now. It is true that self operating machines are scarce and are only found in areas such as government premises and other elite places. It will not only assist people in rural areas because everywhere we have seen people struggling to use pedals sanitising machines for example at the mall people with disabilities, the elderly and those suffering from temporary paralysis are struggling. “Just imagine a situation where a wheelchair user enters a shop that has a pedal sanitiser and there is no one to assist.

I have noticed that many shops have machines that use a pedal, so it is a problem for those without legs.” Sbusiso Ndlovu, a local shop owner, who is also Moimane friend, said the machine was placed at his shop last month. “Since we placed the machine at the shop I have realised that it makes things easier for children
and elderly who visit my shop. They just place their hands and the machine does the work.”-
Mukurukuru Media