by Tebogo Mokwena
in Agriculture
99 1
0

Although it is not uncommon to hear that small businesses are struggling and even shutting down due to load-shedding, some of them are finding ways to not turn the lights off permanently. The North West-based poultry farm Twin Chicks, which mainly has customers in Johannesburg and Ekurhuleni and is run by friends Mpho Serabele and Dimakatso Ngoveni, is one such business. Serabele and Ngoveni told Vutivi News that they have resorted to alternative energy solutions like gas heaters, solar lights, bio-bricks and the South African coal heater known as imbawula.

These energy sources had helped them deal with not having power. Ngoveni said that they had to become innovative and prepared for load-shedding, which could go on for weeks at a time. Ngoveni also said that they were already aware that during the winter periods, load-shedding was a serious problem for poultry farmers, whose chickens needed heat to survive. 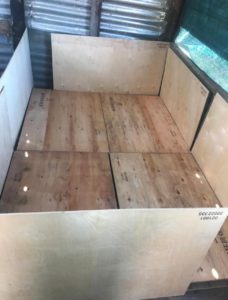 She said the pair had to buy a lot of coal, which cost them about R130 for a bag. It was used to light up the imbawula to keep the chickens warm at night. They also found ways to cover the chicken coops to block the wind. “Bio-bricks are very helpful as a backup plan to the coal, even though they burn quicker than coal,” Serabele said. “We also use gas heaters in case of an emergency, and we spend R270 for a gas cylinder.

“We also place wooden pallets on the floor before we place the chickens to prevent them from being affected by the ground’s cold temperature. At this point, we are trying to use all types of methods to ensure that our chickens do not die,” she said. Serabele said that although these methods were helpful, they were costly and required consistency in maintaining the chicken coops’ heating system. “Our farm manager is very dedicated in his task, and ensures that the chickens are warm, especially for the chicks that are between five to 12 days old,” Serabele said.

“At some point, he was sleeping in the chicken coop, because temperatures tend to drop in the middle of the night and he has to be there to maintain a certain temperature.” Ngoveni agreed that these interventions were not cheap. “We are thankful that we have jobs that help us sustain our business, but we are faced with an inflation rate that just increased, rising petrol prices and an increase in feed prices, which is a pandemic on its own,” she said.

“If only the government could consider funding small-scale farmers like ours, we would be able to prepare for winter seasons. “It is unfortunate, though, that there are small businesses that are not as fortunate as we are in preparing for load shedding.”