Limpopo farmer Matome Mokgobu has many passions and goals, including transforming the land in her village into a commercial enterprise to help fight poverty and create jobs. Mosibudi Trading Enterprise was launched in Bochum, Limpopo, in 2016 after Mokgobu completed an internship for her Diploma in Ornamental Horticulture. When I grew up, my parents were planters and after a few years they got a borehole but did not pursue farming the way I did,” she said.

“However, I had a passion for farming, and I used to daydream about being a farmer… I also saw that work was hard to find and saw a better opportunity in farming.” Mokgobu told Vutivi News that the 19 hectares of land she uses belong to her family. Her farm specialises mainly in crops such as potatoes, cabbage, spinach and peppers.

In Bochum, she supplies Boxer Supermarket, Bochum Market, Spar and Galito’s. And one of Mokgobu’s biggest achievements is her partnership with Potato SA. “I am currently in the small growers’ programme with Potato SA, and I want to upscale to the developing enterprise programme where I can use 10 hectares and above,” she said. “The partnership started last year, and they supply us with fertiliser and capital to plant the potato.” 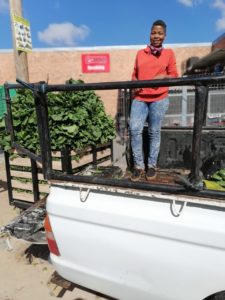 While she has big dreams for her community, Mokgobu started her farming from humble beginnings in a backyard. She moved to her farm in 2018 after she got a contract to grow cayenne pepper. “I sold on the streets of Bochum before I started supplying Polokwane Fresh Produce and Boxer in 2020,” she said. And last year, she started supplying Galito’s with spinach. When Mokgobu moved to her farm, she not only had financial troubles, but goats and rabbits proved to be pests.

“Farming requires capital, so it was challenging to plant stuff like cabbage on a bigger scale. So, I had to plant bit by bit so I could scale the farm and produce enough to supply markets,” she said. “When I moved to the farm, the rabbits plagued me for three years, until someone showed me how to get rid of them. “Goats also used to jump over the fence and eat crops, and there was a time when there was a drought and when they saw the green produce, they would go for them.”

Mokgobu, who participated in De Beers’ Accelerating Owned Micro-Enterprises (AWOME) programme in 2019, now wants to tap into the vast land reserves of her village.“Since our village has huge land, I’m going to use land from the village, pay the villagers rent for their land and hire the youth from villages to empower them with work, because our village has one of the most biggest land in the municipality but is not used,” she said. Mokgobu also plans on continuing to educate the public about farming.

12
No Result
View All Result