Lettuce that is produced by farmer Godfrey Rasogo

When Godfrey Rasogo started hydroponic farming, he learnt plenty about lettuce, including its nutritional value. He observed that while people ate lettuce to lose weight, it was not as nourishing as they thought. And this set him on his entrepreneurial journey to supply nutritional lettuce, which he now supplies to different stores in his home city of Rustenburg.

Rasogo Gardens was founded in 2020 from the salary the farmer received as an engineer based in Lephalale, Limpopo. The company produces Lollo Rossa (red leaf) and Lollo Bondia (green corral) lettuce and employs one person. Rasogo explained to Vutivi News how people fell into the habit of consuming lettuce that was not as healthy as they thought.

“There is a difference in lettuce types. People normally consume iceberg lettuce, which tastes nice but is low in nutritional value,” he said. “On the other hand, green oak, red oak and butter lettuce contain higher levels of nutrition and is the type of lettuce to consume if you want to lose weight.” Rasogo said that competing with larger farmers was difficult as there were many variables at play. 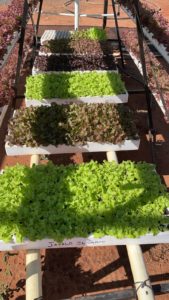 “We are in competition with conventional farmers who sell their lettuce at a very cheap price,” he said. “The onus is always on me to show the advantages and disadvantages of hydroponic farming to prospective suppliers, and also match the retail price while keeping in mind the need to make profit from my sales.

“This can only be done by conducting a lot of research and having a mentor. Having a mentor enables you to avoid making mistakes that a lot of people starting out in businesses make.” Rasogo said that these were not his only challenges.

One his most persistent concerns was the cost of transporting the lettuce to suppliers. “Our village is situated 60km from town, and it, therefore, strains our pockets when we have to consider petrol and travelling costs,” he said. “We have decided to consider expanding to the town so we can be nearer to the malls and be able to supply more outlets at reasonably cheaper prices. “One of the most pervading issues is electricity and load-shedding. When load-shedding strikes, the produce dies, and we lose profit. So, we bought a generator for backup to avoid making significant losses thanks to load-shedding.”

And like many small business owners, he believes that helping create jobs is one of his biggest achievements. “To be able to contribute to the fierce battle against unemployment is nothing short of an honour,” Rasogo said. The farmer plans to expand his business in the next two years.