From backyard to supermarkets shelves

by Tebogo Mokwena
in Agriculture
64 3
0

Kipas Melodi’s journey started with him farming in his backyard in Hazyview, Mpumalanga, and haggling at local markets. A chance encounter with a member of the Israel Embassy now sees him supplying Shoprite and Checkers. Melodi, who was initially a produce worker, told Vutivi News that he started farming in 2006 after seeing a huge gap in the market for spinach.

“I’ve always wanted to be a farmer because it’s a very broad sector,” he said. He started supplying local market vendors with his spinach, however, competition soon made it difficult for him to continue earning a profit. Melodi, who now farms all kinds of vegetables, said that suppliers started squabbling over customers. “You would find that the market was exhausted by too many sellers and it was really bad,” he said.

“The buyer could not take everything from me, and I would have to try and sell my excess stock. A lot of it went to waste.” However, his luck changed when he met the member of the Israel Embassy. “I met Isaac Isaac, who is an Agricultural consultant for the Israeli Embassy, and he helped us a great deal,” Melodi said. “He took five other farmers along with me and he lobbied on our behalf with the government. Three of the farmers no longer continued with us, and those that remained got the opportunity to supply Shoprite and Checkers.” 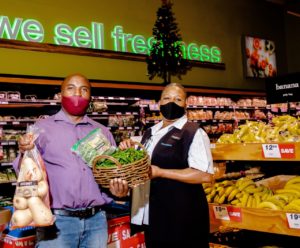 “They advise us on opportunities, letting us know when they are short of this or that, when farmers elsewhere couldn’t supply the products. They also help me look at environmental issues such as crop cycles, which help me make informed decisions.” Melodi also said that this relationship – between buyer and supplier – had helped him navigate through the difficult economic climate brought on by the Covid-19 pandemic.
“This relationship has helped me a lot,” he said.
“It helped create a degree of certainty in an often unpredictable industry and because of this, I have a better idea of when, and what, to plant in order to reap maximum benefits from the land.”