Driven by the need to ensure his community does not go hungry and his own ambitions of being an entrepreneur are why Amos Mathebula came together with like-minded people to start a project. The aim of Too Fresh Produce, an organic farming cooperative, is to provide quality produce at a cheaper price for locals.

The cooperative was founded in 2018 by five executive members and is currently located in the backyard of Mathebula’s family home in Morgenzon, Mpumalanga. It produces vegetables such as spinach, beetroot, green pepper, jalapeño and pumpkin. 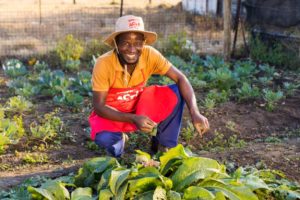 Mathebula told Vutivi News that he adopted his great-grandfather’s land in 2012 after he died. He grew maize and vegetable. “I used to stay in Johannesburg and would come during planting season, plant the vegetables and go back to Johannesburg,” he said.

“However, because I realised that there was low food security in the community, I came back in 2018, and stayed permanently to develop the business.” After he helped launched the cooperative, Mathebula went looking for financial aid so that they could start the farming operation.

That was when he approached the Shoprite Group and they joined forces in 2019.

“I went to their website where I came across their ‘Acts for Change’ programme that helps community food gardens with development opportunities. We’ve received so much support from Shoprite so far, from tools to seedlings, trees, fertiliser and netting to protect crops,” the businessman said.

“We supply them with green peppers and jalapeños, and we came to an agreement that this September we will supply them with spinach. There are only a few places in a town nearby that supply vegetables.” Mathebula told Vutivi News that what he enjoyed most about organic farming was that it was affordable and produced better results without using chemicals.

He said that he planned on contributing further to food security by venturing into animal farming, including pigs, goats and rabbits, in the next few years. “I’d like to triple my production, so I am busy redesigning the food garden. The more crops we can yield, the more profits we can make,” the businessman said.

“I am convinced that if you want to start something, you just have to get started. You can read all the books you want, but if you haven’t taken the steps you haven’t done anything. The best thing to do is to take a step towards what you want, the knowledge and confidence will come.”