Farming is an enterprise that requires a lot of sacrifice and courage, which Mabhoko Mabotja embraced when he ventured into agriculture. Mabotja, who was inspired by a former colleague, sacrificed his creature comforts to finance his dream of becoming a farmer on a scale far greater than his grandfather. Speaking to Vutivi News, Mabotja said that he ventured into farming in 2016 after inheriting his grandfather’s land and cattle.

Mabotja, who is based in Ga-Mashashane in Polokwane, said that he bought livestock every month with the salary he received while working for Netcare in Roodepoort, Johannesburg. “My peers were buying fancy lunches and mocking me for not joining them, but I knew what I wanted in life, which was to be a farmer,” he said. “My love for farming was sparked by the regular visits I made to my former colleague’s farm in the North West. I started buying goats with my salary, and shortly afterward I started buying sheep.” 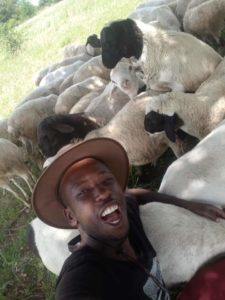 Now Mabhoko’s Farm farms cattle, goats, sheep, pigs and vegetables, which include beetroots, spinach and beans. He supplies his fresh produce to Gosiame Wholesalers and other supermarkets which are based in Polokwane. He also sells his cattle and sheep at livestock auctions, provides black emerging farmers with his goats and sells his pigs to residents in Polokwane, which he converts to meat.

Mabotja said that it was difficult to operate his farming operation while working at the same time. “My livestock would be sick and would die as a result of not being properly taken care of, and this compelled me to resign,” he said. “When I resigned and received my severance package, I used that money to purchase more livestock.” Like many other enterprises, Mabotja’s profit margin was negatively affected by the Covid-19 lockdowns, with livestock auctions being put on halt.

He had to come up with a way of keeping his operation alive. “I decided to open a tuckshop in Turfloop, where I sell my fresh produce as well,” the farmer said. “However, since the lockdown restrictions were eased, I was able to restore my profit margins and make more than enough to continue operating,” Mabotja said that one of his biggest headaches was livestock theft.

“A few years ago, I was a victim of livestock theft, and 40 goats were stolen from me and taken to an auction centre in Bela-Bela. I was lucky that I had opened a case and was able to retrieve my stolen livestock without incident,” he explained. “I believe that the government should crackdown on illegal auction sites because a lot of farmers lose their livestock in this manner.”

But despite the challenges, farming remains Mabotja’s passion. “Farming is my life and I encourage those who want to start, to go into it headlong with a brave and fearless attitude, and pay no mind to the naysayers,” he said.