Farming is not for everyone: Sebata Maize owner

Matsole's agricultural journey started when he was born on a farm

Phaladi Matsole, who has his own maize brands, has lived and breathed farming since a young age. The owner of Sebata Super Maize Meal, which was launched this year, has taught agriculture for 25 years while being a farmer for 13 years. Speaking to Vutivi News, Matsole, who is based in Frankfort in the Free State, said his agricultural journey started when he was born on a farm.

“When I grew up, we had a big garden of vegetables and we never bought vegetables. We also had chicken and cattle, so we always had fresh milk for summer and winter,” he said. “I remember how my mother used to travel to Gauteng on the 15th and the last day of the month to deliver slaughtered and plucked chicken and collect payments respectively. 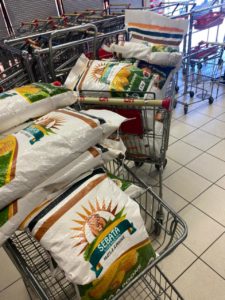 “Although I started farming in 2009 with cattle, pigs and grain, it took me all of six years from 2016 to 2022 to establish my maize meal brand,” he said. “I used to buy livestock like cattle when they were still young, rear them and sell them, and that is how I funded the business.”

Matsole told Vutivi New that he learned the importance of crop rotation while studying for his degree. “I’ve been planting corn one year and soya beans the next because soya fixes nitrogen in the soil, and any crop farmed on soya soil has very high yields,” he explained.

Today, Matsole runs a mill with his family, but he does not have the machinery to grind the maize into maize meals. Instead, he grinds his maize in the North West and packages and distributes it in a warehouse in the Free State, which supplies supermarkets and stores in the province, the Eastern Cape, Mpumalanga, KwaZulu-Natal and Lesotho.

And over the next three years, he will continue popularising his brand to gain a national footprint. Matsole reminded prospective farmers to remember that farming was a calling. “If they are looking to make a quick buck, they should consider mining and other business ventures,” he advised.