by Tebogo Mokwena
in Agriculture
93 6
0

Lebohang Dhludhlu who started poultry farming with her husband

Lebohang Dhludhlu and her husband Dumisani’s love affair with poultry farming officially began on Valentine’s Day in 2019. And despite all the heartbreaks they suffered, they have stuck by their love child, which today has given birth to more chickens than they can handle. Speaking to Vutivi News, Dhudhlu said that when the idea came up, they both did not know a single thing about business or poultry farming; all they knew was that they wanted to supplement their household income.

“I was inspired to look into poultry farming, and when I told my husband he agreed, even though at that time we did not have any land or knowledge,” she said. “So we decided that the best way was to start as resellers. We started stocking chickens from a farmer and would resell them. “Our first customer was my mother, and soon after the orders started coming in hard and fast.” However, the Emalahleni couple were forced to cut ties with the supplier, who was based in Nigel, because Dhludhlu felt like he was treating them unfairly.

Dhludhlu said that the couple then attended a business course supported by the National Youth Development agency in 2019. It was there that they met their first business partner, a relationship that proved to be disastrous in the end. “The man we met told us that he had seven years’ experience as a poultry farmer, and we agreed to start a farm together. However, tragedy struck when our farm was affected by heavy rains and we lost a lot of chickens,” she said. 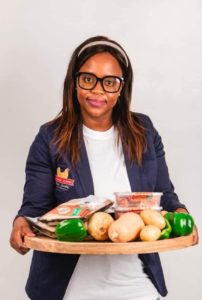 “We decided to stop doing business with him because our attempts at fixing the problems we faced at the farm were met with arrogance. Despite that, we learned a lot about running a poultry farm from that experience, and we decided to do our own thing.” Dhludhlu said that they approached the chieftain of a village near Emalahleni and asked for land to start a farm. They were granted permission to use 2.5 hectares of land. However, by this time they were flat broke after spending the money on the land and building their first chicken structure.

When the pandemic struck and the Department of Agriculture, Land and Rural Development announced its Covid-19 Relief Fund which awarded small-scale farmers vouchers, they decided to apply. They received an R60,000 voucher, which they used to buy their first 700 chickens and chicken feed at the land they had obtained in Emalahleni. By December the chickens were already sold out, and this empowered them to build another structure.

Today, the farm produces a total of 3800 chickens every six weeks, and with their reselling model, it has 65 resellers who sell the chickens on their behalf. “Today we supply the resellers and they sell for us,” she said. Dhludhlu also runs a free mentorship programme for emerging farmers like herself, where she shares knowledge and information about the ins and outs of poultry farming. She envisages the business growing to produce over 300,000 chickens and employing over 1000 people. They currently have two employees.