For Nkosana Mtimkulu and his father, Stephen, venturing into milk production was not enough to sustain their drive to grow a business for their family. Since starting South-Western Dairy in 2010, they have expanded to make dairy products and intend to leave their mark on the industry. They now also have a factory in Tshwane that employs five people. 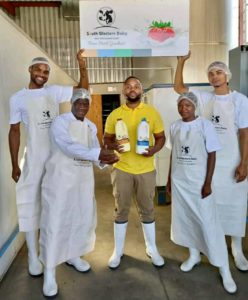 The company is involved in the manufacturing of fresh milk, amasi (sour milk), dairy blends and 100% fruit juices. It supplies supply coffee and spaza shops, as well as three Spars, Big Save retail supermarket and OBC franchises. Mtimkulu told Vutivi News that the company started off by selling fresh milk to neighbouring villages and communities. “We were milking 30 cows and I was selling the milk from the back of my bakkie for three to four years. I got the milk from the family farm which is in the North West,” he said.

The businessman said the demand for milk grew and the family decided it was only logical to start expanding. “After four years of operating we decided to change the business model and move to Gauteng where we can buy milk from different farmers based in Gauteng and allow black dairy farmers to be active in the milk industry,” he said.

“This is where we stopped producing the milk ourselves and started being supplied by other farmers. It was a strategic business move.” Mtimkulu said that while the company was doing well, it was still struggling to get access to new markets. “We need access to markets and to let other retailers and large establishments open opportunities for us to be able to supply them with our dairy products,” he said.

But he was confident South Western Dairy would survive as it was a well-known brand. When restaurants are closed and retail shops are not opening, my business suffers,” he told Vutivi News. “However, I believe in the business and in the brand, and it’s because it has a sustainable future.” Mtimkulu also said that South Western Dairy had a future because it was committed to transforming the agricultural sector to make it more inclusive, help create jobs, alleviate poverty and ensure food security.